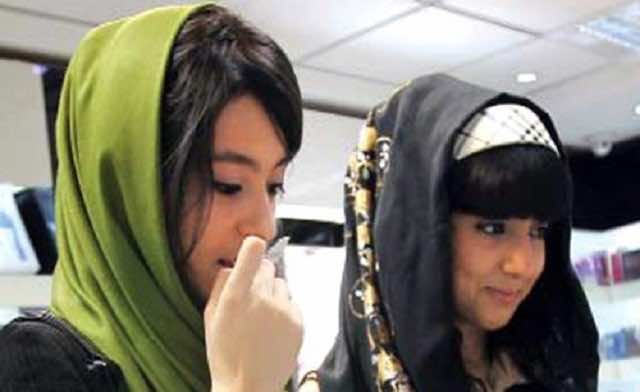 You wouldn’t believe Iran is the leader in nose jobs if you’d been to Beirut, Lebanon a couple of times, where women there are known for their plastic surgeries. But, despite Iran’s conservativeness, the people’s obsession with physical beauty seems to be very evident, as Iran reportedly has “the highest rate of nose surgery in the world,” reported The Guardian.

Citing the Iranian Etemad newspaper, the Guardian said nearly 200,000 Iranians, mostly women, undergo nose surgeries every year to “reduce the size of their nose and make the tip point upwards.”

An Iranian woman told the British paper cosmetic surgeries are merely a reaction to restrictions imposed on women because of the Hijab.

“They won’t let us display our beauty,” said the woman.

“It’s human nature to want to seek out attention with a beautiful figure, hair, skin … but hijab doesn’t let you do that. So we have to satisfy that instinct by displaying our ‘art’ on our faces,” she continued.

Another woman told The Guardian it was a way of benefiting from today’s technological advancements.

“Science and technology have progressed, and people can look more beautiful,” she blasted. “Why shouldn’t we?”

Cosmetic surgeries in Iran are costly when it is compared to an average person’s monthly income. The average nose job ranges between $1,651 to $3,303.

As sanctions take a hold on the country we may just see a decline in cosmetic surgery. Or is it just the rich that have that pleasure?