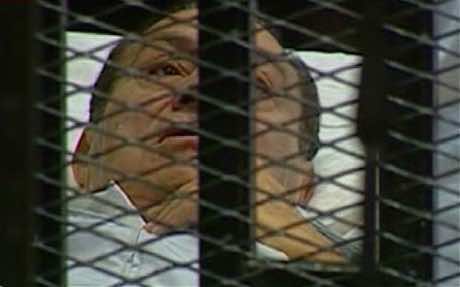 A retrial of former president Hosni Mubarak, jailed for life for his role in the deaths of protesters in 2011, is to open on April 13, Egypt’s official MENA news agency reported on Sunday.

Mubarak, former interior minister Habib al-Adly and six top security chiefs will be retried on orders of the Court of Cassation, Egypt’s top appeals court, over the hundreds of killings during the 2011 uprising which ousted him from power.

The court agreed in January on a retrial for Mubarak, 84, who appealed against his life sentence for involvement in the deaths.

The April 13 date was decided by the president of the Cairo appeals court, Samir Abul Maati, MENA said, adding that Mubarak’s sons Alaa and Gamal as well as fugitive businessman Hussein Salem would also be in the docks.

In January, Judge Ahmed Ali Abdelrahman said he accepted appeals by Mubarak, Adly and the prosecution, cancelling all previous rulings by the Cairo criminal court.

Mubarak’s epic fall from grace, from the dictatorial head of the Arab world’s most populous nation to a defendant behind bars, was for many a promising sign that the revolution which toppled him was on the right track.

But the case against the former president verged on the farcical, with patchwork evidence and prosecution witnesses exonerating the defendants, according to legal experts.

On June 2, Mubarak and Adly were sentenced to life in prison for failing to prevent the deaths of more than 800 protesters during the 18-day uprising that began on January 25, 2011.

The six security chiefs on trial in the same case were acquitted.

Mubarak’s sons, Gamal and Alaa — once the symbols of power and wealth in the country — were acquitted on corruption charges due to the expiry of a statute of limitations.

The rulings sparked nationwide outrage, with thousands taking to the streets to vent their anger that no one had been found directly guilty of killing the protesters.

Businessman Salem, who is said to be in Spain, will be retried along with Mubarak for corruption.

In January, an ailing Mubarak who has been treated for fractured ribs and fluid in the lungs at a Cairo military hospital, was also interrogated over fresh charges of corruption.

He is accused of accepting gifts worth seven million Egyptian pounds (around $1 million) from the country’s flagship state newspaper Al-Ahram.