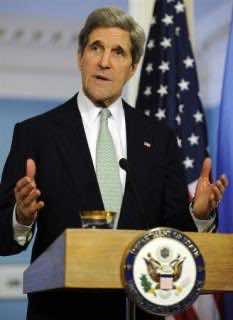 US Secretary of State John Kerry was to meet the Egyptian president Sunday as he wraps up a trip to Cairo, where he urged divided factions to reach a consensus that would pave the way for economic recovery.

Before going into talks with Islamist President Mohamed Morsi, the US secretary of state met army chief Abdel Fatah al-Sisi.

Kerry flew in to Cairo from Turkey on Saturday and urged a wide range of political and business leaders to reach a consensus, after months of political turmoil and unrest.

“There must be a willingness on all sides to make meaningful compromises on the issues that matter most to the Egyptian people,” Kerry told reporters after talks on Saturday with Foreign Minister Mohammed Kamel Amr.

“We do believe that in this moment of economic challenge that it is important for the Egyptian people to come together around the economic choices and to find some common ground in making those choices,” he said.

Kerry’s visit comes with Egypt deeply divided between Morsi’s mainly Islamist allies and a wide-ranging opposition that accuses Morsi of failing to address the country’s economic needs and political concerns.

Kerry said he would discuss with Morsi on Sunday ways in which the United States could help Egypt recover from its economic crisis.

“And I emphasise again, as strongly as I can, we’re not here to interfere, I’m here to listen,” Kerry said.

Meeting some of Egypt’s business leaders, Kerry stressed the importance of a $4.8-billion IMF loan, which is partly conditioned on a measure of agreement between the nation’s divided factions.

“It is paramount, essential, urgent that the Egyptian economy gets stronger, that it gets back on its feet,” he said. “It is clear to us that the IMF arrangement needs to be reached. So we need to give the marketplace the confidence.”

Kerry said Washington was prepared to help Egypt, which has seen its foreign currency reserve slide to a critical level and the Egyptian pound lose around eight percent against the dollar.

“All of them are prepared to be helpful but all of them believe that Egypt needs to make some fundamental economic choices,” he said.

Kerry began the Cairo leg of his tour by meeting Arab League chief Nabil al-Arabi, before evening talks with Amr.

Outside the foreign ministry, dozens of protesters burned pictures of Kerry as they chanted against perceived US support for Morsi.

But Kerry insisted the United States was not biased towards any party.

Kerry also spoke with Mohamed ElBaradei by telephone. ElBaradei and opposition figure Hamdeen Sabahi had refused to meet him in person.

All three are leading figures in the National Salvation Front, a coalition of liberal and leftist parties opposed to Morsi, which has announced a boycott of elections that begin next month.

The president has called for staggered parliamentary elections to start on April 22. The NSF said it would boycott the polls, expressing doubts over their transparency.