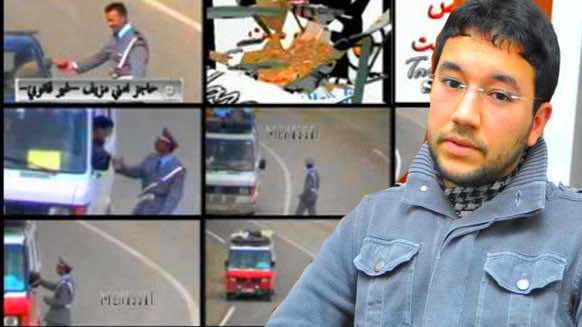 Known as the “Zorro” of Targuist, his village in northern Morocco, Mounir Agueznay secretly filmed the corruption of police and public officials for six years before finally revealing his identity to the press.

In a 10-minute video that he took with a small camera in 2007, Agueznay filmed motorists, bikers and bus drivers discreetly handing money to the police in Targuist who let them through unimpeded.

The images were posted on local Internet sites, but gained international notoriety when they were picked up and broadcast by Arab and Western satellite TV channels.

“Together with some friends in my neighbourhood, I was summoned by the local authorities and by the police. They interrogated us at length, and I had to deny the whole thing,” Agueznay told AFP.

He said he had decided to reveal his identity to the press after pursuing his “clandestine” activity for six years and filming dozens of videos showing Moroccan officials engaging in similarly blatant acts of corruption. Last week he agreed for the first time to give “uncovered” interviews to the Moroccan press, because “the sniper became very well known, but without a face.”

“It’s time that he has a face,” said Agueznay, who is also known as the “sniper of Targuist.”

“But I will continue to denounce corruption.”

In December, Transparency International dropped Morocco eight places, in its annual Corruption Perceptions Index for 2012, to 88 out of 176 countries rated, below Burkina Faso and Liberia.

According to the Berlin-based NGO, 55 percent of Moroccan business leaders polled said corruption was “standard,” while 53 percent said the government’s policy was “ineffective.”

The Islamist Party of Justice and Development (PJD), came to power after winning historic November 2011 elections on the back of pledges to tackle endemic corruption in Morocco.

PJD officials say strides have been taken, with lists published last year of those benefiting from privilege, through the awarding of government contracts, and most recently with a new law that protects corruption whistleblowers.

The authorities in Targuist strongly suspected Agueznay of shooting the videos, but after failing to catch him he says they turned on his family instead.

“To get their revenge, they arrested my brother Radouane last October and accused him of drug dealing. He was sentenced to one year in prison,” Agueznay said.

The “sniper of Targuist” says he is disappointed by the government of Islamist Prime Minister Abdelilah Benkirane, who heads the PJD.

He ran as a PJD candidate in his village during the November 2011 elections, which followed constitutional reforms introduced by the king in response to Arab Spring protests, but despite the Islamists’ sweeping victory, he was not elected.

“I really didn’t believe it. I thought that after the electoral slogans of the PJD against corruption and in favour of real transparency, things would change… Unfortunately the government has still not taken any concrete measures on that,” he said.

Benkirane, in an interview with French news channel France 24 last October,  stressed that the battle against corruption needed time.

“Corruption exists in Morocco. It exists in lots of countries… but to different degrees,” the prime minister said.

He said it was “a major issue, because there is a feeling of injustice among our people, who see people getting rich quickly without apparently having worked for it.”