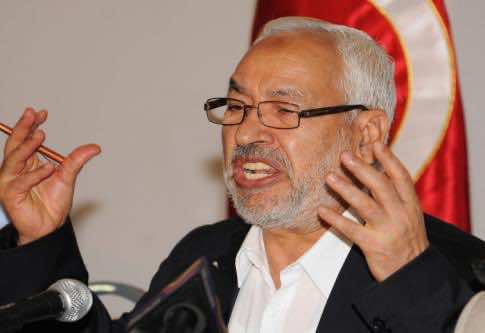 Angry residents of a town in northern Tunisia hurled stones at the car of visiting Islamist leader Rached Ghannouchi
on Sunday, a security source said. At the sight of Ghannouchi, several dozen people in Thala shouted “Get out!”- one of the rallying cries of the revolution that toppled the regime of former dictator Zine El Abidine Ben Ali in 2011.

The chief of Tunisia’s ruling Ennahda party quickly got back in his car, which some protesters then pelted with stones, breaking the rear window, the same source said.

Zoubeir Echhoudi, an aide to Ghannouchi, said some youths threw rocks at the convoy of Ennahda members, which had come to take part in the reburial of an activist executed in 1963, under the regime of Tunisia’s founding president
Habib Bourguiba.
The remains of Ahmed Rahmouni had been exhumed at the request of his family, who wanted an autopsy carried out to determine the real cause of his death.

Since last year, a number of political figures have been attacked by Tunisians angry about the government’s performance.  At celebrations to mark the second anniversary of the start of Tunisia’s revolution, President Moncef Marzouki and parliament speaker Mustapha Ben Jaafar were heckled and pelted with stones in the town of Sidi Bouzid as they were about to address the crowd.