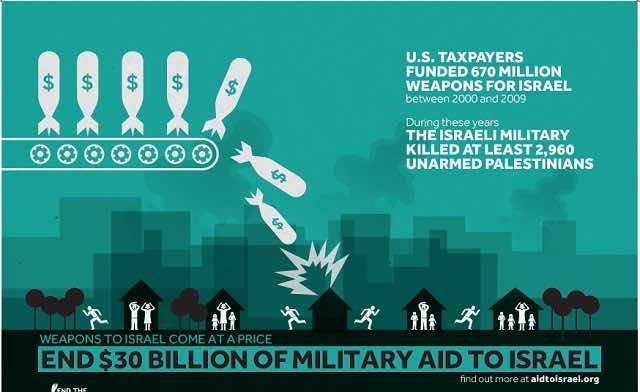 An advertising drive is expected to take Washington D.C by storm on Monday as the U.S. Campaign to End the Israeli Occupation and Visualizing Palestine call on the United States to halt $30 billion of military aid to the Jewish state.

The campaign comes as the American Israel Public Affairs Committee (AIPAC) began it’s an annual policy meeting in the U.S. capital on Sunday. This will continue for another three days as the U.S. national coalition works to highlight the devastating impact of U.S. weapons on Palestinians.

“At a time when the sequester is cutting billions of dollars from programs to help those in need, it is grotesque that AIPAC is lobbying Congress this week for ever-increasing amounts of military aid to Israel, especially as these U.S. weapons are used by Israel—in violation of U.S. laws—to abuse Palestinian human rights,” stated Josh Ruebner, National Advocacy Director of the U.S. Campaign to End the Israeli Occupation.

A three-day mobile truck ad has been tasked with following AIPAC attendees during their conference as they lobby Members of Congress for more weapons for Israel.

But, the ad show, planned to be showcased on Monday, will be set up at three Washington D.C Metro train platforms looks at the U.S. budgetary trade-offs taking place at the expense of the country’s local community needs.

“We see visual media as an essential tool in communicating marginalized social justice issues to a mainstream audience. We hope that this ad campaign will spur U.S. taxpayers to question more actively where their money is being spent at such a critical time,” said Ahmad Barclay, Lead Information Architect with Visualizing Palestine.

For the first time in seven years, neither the U.S. president nor the Israeli prime minister is scheduled to attend the AIPAC conference, according to Israel’s Haaretz news website.

Haaretz also reported that for “the second year in a row, no mention of the Palestinians, negative or positive, appears on the conference’s legislative agenda.”

AIPAC’s conference will focus instead on pushing for a Congressional legislation that would designate Israel as a “major strategic ally” of the United States. If enacted and adopted, the legislation will give Israel a status that no other nation on earth enjoys with America.

It is also reported that the legislation will make it easy for Israel to obtain a U.S. approval for a strike against Iran.

US Elections: Who is Kamala Harris, Joe Biden’s Running Mate?