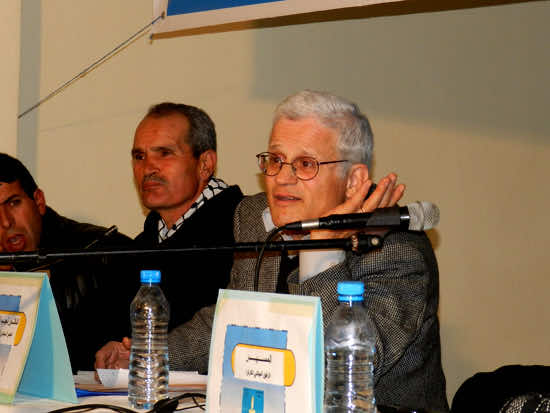 Moroccan economic expert Najib Aqesbi and member of the National Council of the United Socialist Party gave a talk in an open meeting organized by the branch of the party in Tahla, Taza on Saturday, March 2nd.

Mr. Aqesbi said that the “economic situation in Morocco is moving towards the abyss” and that Morocco is still “suffering from an economic crisis linked to previous political choices that lacked a holistic view.”

Aqesbi talked about a number of economic issues in Morocco and expressed his astonishment at the hopeless situation of Tahla which has all the necessary conditions to be a prosperous region – abundant water, fertile land, and the human element- yet it wallows in all sorts of social and economic problems.

The economist added that the economic crisis in Morocco “is multifaceted and it manifests itself through the continuous failures of the alternate policies taken in several areas.” He presented a detailed diagnosis and explained that the pace of our economic growth is “weak, volatile and doesn’t meet the minimum required.”

“At best the economic growth rate doesn’t fulfill people’s expectations such as the creation of new jobs and the enhancement of per capita income,” he said,

The professor at the Hassan II Institute of Agronomy and Veterinary Medicine noted that the model of the Moroccan economy “creates social disparities on several levels and benefits only a lucky group at the expense of other social classes.”

He added that the economic structures (agriculture, industry, services etc.) are outdated and disintegrated, which results in poor and weak productivity. The speaker added that the policy of free trade agreements adopted by Morocco is “useless” since it causes a trade deficit of 53 percent.

“This is because there is an absence of the conditions of trade openness that would protect and benefit the national economy,” he said.

Aqesbi called for the strengthening of the national economic fabric to make it competitive enough instead of flooding Moroccan markets with foreign products, while Morocco exports nothing. This situation negatively impacts the balance of payments (BoP), which causes the state to resort to foreign debt to cover its deficit.

Najib Aqesbi criticized these free trade agreements and considered them a failure, rather a threat to the sovereignty of the state and the social stability.

“These agreements are beyond the responsibilities of the government because they are decided and ratified by the head of the state, usually without even discussing even if they have a direct impact on the people,” he noted.

Such agreements are conceived as obligations between countries, and thus cannot be changed. In the case of failure, they are beyond accountability, which is now the case in Morocco.

At the end of his lecture, Najib Aqesbi gave what he considered proposals to overcome the situation.

He called for fundamental reform of the structure of the political system which controls almost everything.

“In most big projects, the parliament is the last to know; a situation that makes linking responsibility with accountability almost impossible,” he said.

While stressing the importance of social policies, he emphasized the need to reform justice and education in particular, and to take holistic approaches rather than sectoral planning (Green Plan, Blue Plan…) that “are dictated by foreign consultants.”