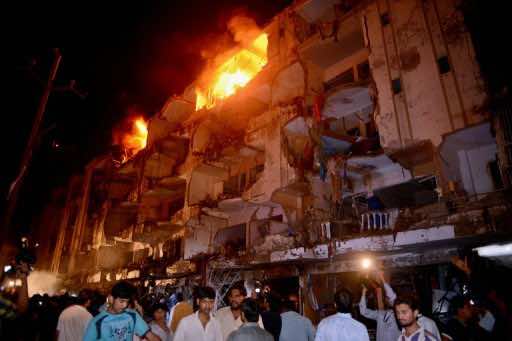 Pakistan’s largest city Karachi shut down on Monday to mourn 45 people killed by a car bomb in a Shiite Muslim neighbourhood, the latest in a series of devastating attacks as Pakistan prepares for elections.

Traffic was thin as educational institutions, businesses and markets closed after the local government announced one day of mourning and Shiite groups three days of mourning for those killed in Sunday’s bombing.

The bomb exploded as worshippers were coming out of mosques in the neighbourhood of Abbas Town, ripping through two apartment blocks and trapping people beneath piles of rubble.

Those who survived but whose homes were damaged or destroyed are being housed temporarily in schools, officials said.

Local transport and traders’ associations said that they would not be working on Monday. “There will be no public transport on the roads today,” said Karachi Transporters Association chief Irshad Bokhari.

Head of the Karachi Traders’ Alliance, Attique Mir also said that shopping centres and malls as well as business activity would remain suspended.

But the city is plagued by sectarian, ethnic and political violence that last year killed more than 2,200 people and which routinely forces closures, damaging businesses.

On Monday, the stock market was open, but Mohammad Sohail of brokerage firm Topline Securities said there were fewer dealers and trading volumes were low.

Officials said 45 people, including women and children, were killed and around 150 others wounded in the attack. Although Abbas Town is a mainly Shiite neighbourhood, officials said some Sunni Muslims were also among the dead.

Police are preparing a list of those killed and are trying to identify the dead with the help of their relatives.

Pakistan’s parliament is due to dissolve in two weeks in preparation for elections, but rising violence against Shiites, who make up around 20 percent of the 180 million population, has raised serious questions about security.

“The unfortunate reality is that things could take a turn for the worse as tensions increase ahead of the approaching general elections,” newspaper The News wrote in an editorial on Monday.

“The risk of violence, especially in Karachi, is very real. With election preparations in full swing, the processions, meetings and rallies that accompany our electoral campaigns have the potential to lead to chaos,” it added.

Last year was the deadliest year on record for Shiites in Pakistan with more than 400 killed, according to Human Rights Watch.

A bomb at a shrine visited by Shiites in Shikarpur district, some 400 kilometres (250 miles) northeast of Karachi, killed two people last Monday.

A day later the Supreme Court ordered the authorities to come up with a strategy to protect Shiites after bomb attacks on Shiite Hazaras in the southwest on January 10 and February 16 killed nearly 200 people.

Both attacks were claimed by banned extremist Sunni group Lashkar-e-Jhangvi, and have highlighted the government’s inability to stem sectarian violence.

The Pakistani Taliban have also increased their campaign of violence in recent months, leading to fears that it could mar the election which is scheduled to take place by mid-May.

Last month the group proposed talks with Islamabad but the government insists the militants must declare a ceasefire before coming to the negotiating table — a condition militants have rejected.