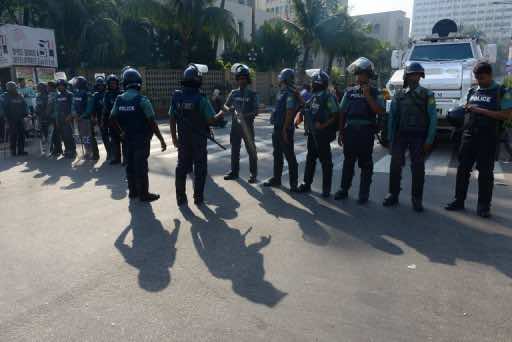 Schools and businesses were shut Monday across Bangladesh on the second day of a general strike as huge numbers of police were deployed to put a halt to the deadliest bout of violence since independence.

Sixty-one people are now known to have died in clashes since Thursday when Islamists erupted in outrage at the sentencing to death of one of their leaders who was convicted of war crimes dating back to the 1971 liberation conflict.

Delwar Hossain Sayedee, who is the vice-president of the Jamaat-e-Islami party, was the third Islamist to be sentenced by the domestic tribunal.

Although there were no immediate reports of fresh violence on Monday, police did confirm the death of a man in the southwestern district of Satkhira following clashes on Sunday between border guards and Jamaat supporters.

The latest death brought the overall toll to 77 people since the court handed down its first verdict on January 21, making it the bloodiest round of violence since the country broke free from Pakistan more than four decades.

The verdicts and the ensuing violence prompted Jamaat to call a two-day nationwide strike that began Sunday and has virtually crippled the country.

As well as the closure of shops, schools and government offices, the main road between the capital Dhaka and the second city Chittagong was virtually deserted on Monday as were other inter-city highways.

The numbers of security personnel have been beefed up throughout the country, particularly in Dhaka where around 10,000 policemen and members of the elite Rapid Action Battalion were on duty Monday.

As part of their protests, the Islamists have managed to blockade a highway leading to the popular Cox’s Bazar tourist region, where several hundred holidaymakers have been trapped including some foreigners.

District police chief Azad Miah told AFP that while more than 3,000 tourists had been able to leave since Thursday, mostly having flown out of the local airport, around 700 remained stranded.

The government has banned rallies and gatherings in at least four towns in the north to quell violence, police said.

The war crimes trials of a dozen leaders from Jamaat and the main opposition Bangladesh Nationalist Party have opened old wounds and divided the nation, with the opposition accusing the government of staging a witch-hunt.

The government, which says the 1971 war claimed three million lives, rejects the claims and accuses Jamaat leaders of being part of pro-Pakistani militias blamed for much of the carnage during the war.