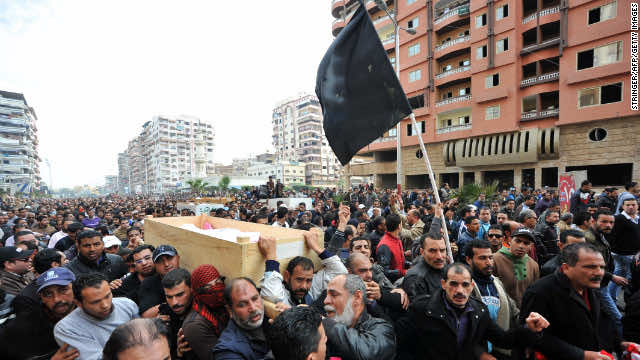 Thousands took to the streets in the Egyptian canal city of Port Said on Monday for the funeral of three people killed in overnight clashes with police.

“The interior ministry (officials) are cowards!” the angry mourners chanted and called on Islamist President Mohamed Morsi to “leave”.

Five people, including two policemen, were killed and hundreds were injured in the overnight fighting after authorities decided to move prisoners awaiting a verdict over alleged involvement in a deadly football riot last year.

The two policemen died from gunshots to the head and neck, an interior ministry official said.

Of the 586 people injured in the confrontations, 16 had been shot with live bullets and 27 from birdshot, according to Ahmed Sultan, head of emergency services.

A security official said earlier that during the night protesters threw petrol bombs and stones at the police station in Port Said, where a general strike entered its third week. Police responded with tear gas.

Fresh violence broke out on Monday afternoon near the security headquarters, where protesters threw petrol bombs at police under clouds of tear gas.

The city has witnessed unrest since January when a court sentenced Port Said residents to death over football violence last year, triggering a series of protests and eventually a civil disobedience campaign.

Traffic in the Suez Canal, a vital waterway for global commerce, has not been disrupted, the canal authority said.

The interior ministry said it decided to move the prisoners from Port Said because it wanted to avoid unrest. The court verdict, expected next Saturday, is for the 39 defendants in a case which resulted in death sentences in January for 21 other defendants, sparking clashes that killed at least 40 people.

Overnight clashes also erupted in Cairo between police and protesters near Tahrir Square.

Police fired tear gas to disperse the crowd as they approached a luxury hotel on the banks of the Nile which was damaged in clashes last month, a security official said.

Officials say calm has since been restored to the area.

Egypt has been gripped by nationwide unrest in recent months, with protesters taking to the streets to denounce Islamist President Mohamed Morsi for failing to address political and economic concerns. Opponents accuse Morsi — elected in June last year after a turbulent period of military rule — of failing the revolution that brought him to the presidency and of consolidating power in the hands of his Muslim Brotherhood movement.

The Nile Delta has also seen its share of unrest, with a civil disobedience campaign declared in the province of Daqahliyah.

One person was killed and dozens injured in clashes over the weekend between police and protesters in Mansura, the province capital.