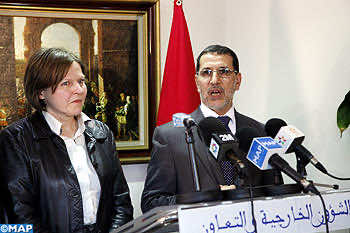 The Minister  also welcomed the steps taken by Morocco in the field of women empowerment, the respect for their rights and equality between the sexes, adding that during her two-day visit to the Kingdom, she will also meet with civil society members and representatives of associations working to improve the status of women. She also thanked the Kingdom for its efforts to find a solution to the Syrian crisis.

In a similar statement, Minister Othmani described as “very good” the political relations between Morocco and Finland, and welcomed the role of this country in supporting the Moroccan civil society.

The two officials said they discussed ways and means to deepen bilateral cooperation, especially in promoting economic and trade exchanges.

These talks were also an opportunity to share viewpoints on the latest developments in a number of countries in the southern Mediterranean, including Mali, Tunisia and Egypt.

The Finnish Minister will also have talks with her Moroccan counterpart, Bassima Hakkaoui before heading to Tunisia, the second leg of her tour in the region.