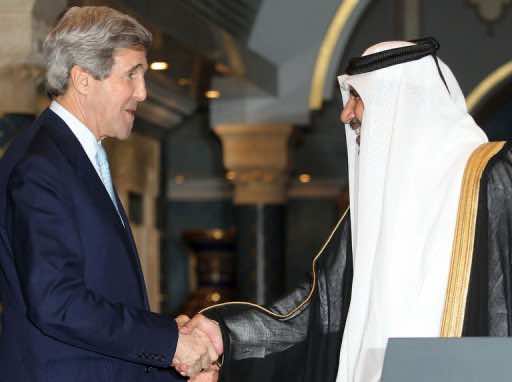 US Secretary of State John Kerry expressed confidence on Tuesday that weapons being supplied by Gulf countries to the Syrian rebels were reaching the “right people,” as he visited key rebel ally Qatar.

“We had discussions about the type of weapons that are being transferred. We are aware of what people are doing,” Kerry told reporters in Doha at a press conference with Qatari Prime Minister Sheikh Hamad bin Jassem Al-Thani.

The new top US diplomat was on the last leg of his maiden Gulf tour, with the Syrian conflict topping the agenda, amid concerns that arms reportedly being supplied to Syria’s insurgents by Gulf countries, including Qatar, were falling into the hands of jihadists.

“We did discuss the question of the ability to try to guarantee (that the weapons) are going to the right people and to the moderate Syrian opposition coalition,” he added, while repeating earlier comments on the impossibility of ensuring that.

On Monday, Kerry said in Abu Dhabi that “there is no guarantee that one weapon or another might not fall into the wrong hands.”

“We need to ensure that our support strengthens the moderate opposition,” he said.

Meanwhile, Sheikh Hamad warned that if the conflict is not resolved soon, “we will find extremist parties taking part in it,” accusing President Bashar al-Assad’s regime of “using this issue” to gain support against his opponents.

However, he said: “I am optimistic that the international community has started to work in a way by which the Syrian people would achieve victory faster. The terrorist is Bashar. He is the one killing his people.”

“There is a change now in the international and American stance” on Syria, which has been locked in a two-year conflict in which the United Nations estimates more than 70,000 people have been killed.

“They are now discussing weapons.”

The United States has so far refused to arm Syrian rebels.

Kerry had said during a visit to Riyadh that Washington was working with its “friends to empower the Syrian opposition,” while stressing it was not arming the rebels.

Several oil-rich monarchies of the six-member Gulf Cooperation Council, notably Saudi Arabia and Qatar, have supported the rebellion against Assad, a staunch ally of their regional foe Iran.

Saudi counterpart Prince Saud al-Faisal has insisted on the right of Syrians to self-defence.

GCC members are dissatisfied by the refusal of US President Barack Obama’s administration to arm the rebels, analysts say.

Washington said last month it would provide direct aid to the rebel fighters in the form of food and medical assistance, but not the weapons they hoped for, as well as $60 million in funding for the political opposition.

At the time, National Coalition leader Ahmed Moaz al-Khatib took a jibe at the West when he spoke of fears weapons might fall into the hands of extremists.

“A lot of people, particularly the media, pay more attention to the length of fighters’ beards (an allusion to jihadists) than to the shedding of children’s blood and regime bombardments,” he said.

Kerry is due to wrap up his regional tour on Wednesday after visiting Qatar, the United Arab Emirates, Saudi Arabia, Egypt and Turkey.