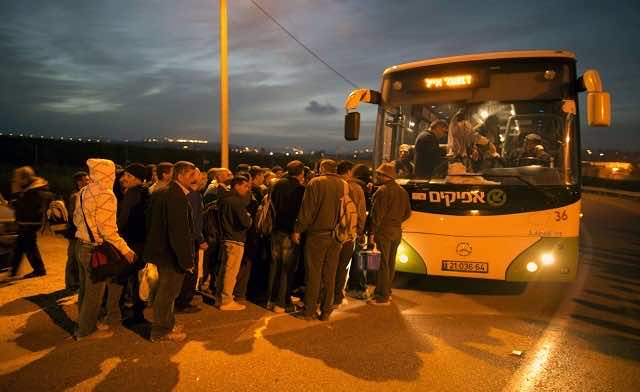 “Two buses were apparently set on fire but we are looking into all possibilities,” police spokeswoman Luba Samri told AFP, saying the incident took place in the Arab-Israeli town of Kfar Qassem which lies very close to the Green Line.

Police sources quoted by army radio said the buses had been torched as a protest against the new transportation system which came into effect on Monday.

The incident took place just hours after Israel began running separate bus lines for Palestinian workers and Jewish settlers, in a move which was bluntly denounced by an Israeli rights group as “segregation” and “simple racism.”

But Israel’s transport ministry denied the charge, saying Palestinians with a permit to work in Israel were allowed to travel “on all public transport lines.”

The controversy over the separate bus lines continued to draw sharp criticism from Palestinian officials on Tuesday.

His remarks were echoed by the Palestinian Workers’ Union which also denounced it as “a racist measure” and said the buses would become an easy target for attacks by settler extremists.

The new bus route ferries Palestinian workers from the Eyal checkpoint just north of the West Bank city of Qalqilya to several cities in Israel where they have permits to work.

The transport ministry says the new lines are to serve Palestinian workers entering Israel in a bid “to replace the pirate operators who transport the workers at inflated fares.”

But Israeli media reports said the service was launched after Jewish settlers complained that forcing them to share public transport with Palestinians was a security risk.

Until now, the workers have been reaching Israel by catching buses which run from outside Jewish settlements which they would ride alongside settlers travelling to Israel.

Ron Nahman, the late mayor of Ariel settlement, had in November said he was in talks with the army, the police and the transport ministry to find ways of “stopping Palestinians from boarding the buses that go to Ariel.”

“All of them are working on this problem, and we hope that they will soon find a solution to the reality that is bothering our people,” he wrote on his Facebook page.