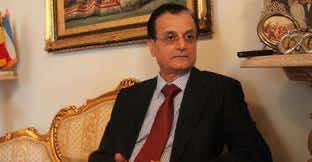 Lebanon’s foreign minister on Wednesday called on Arab foreign ministers gathered in Cairo to allow the Syrian government retake its seat at the Arab League, from which it was suspended in 2011.

Adnan Mansur called for the “return of the Syrian government to its seat at the Arab League after Arab states failed to resolve the Syrian crisis.”

The League, which suspended Syria in November 2011, said at the time the suspension would apply until President Bashar al-Assad implemented an Arab deal to end violence against protesters.

A year later, the League recognised the Syrian National Coalition headed by Ahmed Moaz al-Khatib as the “legitimate representative and main interlocutor with the Arab League.”

Assad’s forces fiercely cracked down on what were initially unarmed protests inspired by the Arab Spring but the crisis has since escalated into a deadly civil war.

Over 70,000 people have been killed in the conflict since March 2011, according to the United Nations, which on Wednesday put the number of Syrian refugees at one million.