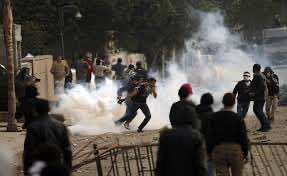 New clashes between police and protesters erupted on Wednesday in the Egyptian city of Port Said, the scene of several days of unrest, AFP reporters said.

Police and protesters lobbed rocks at each other under a volley of tear gas that caused several people to collapse. Gunfire could also be heard, as military planes circled low overhead.

Tension has been running high around the main security building in Port Said, which was set ablaze on Tuesday for the second day in a row.

“Dirty government!” the protesters shouted, as they ran away from the thick gas.