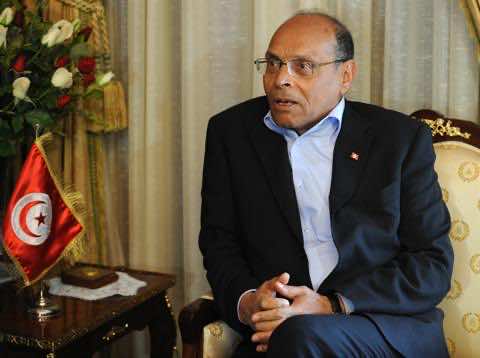 Tunisia’s secular president said in comments published on Wednesday that Salafist hardliners blamed for deadly violence since the 2011 revolution should be fought but within the bounds of the law.

President Moncef Marzouki said there should be no return to the strong-arm tactics of ousted dictator Zine El Abidine Ben Ali, even after the February assassination of leftist politician Chokri Belaid that has sparked Tunisia’s worst crisis since his overthrow.

“I want to continue talks with the traditionalist and reformist currents” of the Salafist movement, Marzouki told Algerian newspaper El Khabar in an interview.

“As for the armed current, we will fight it (but) I insist that that be done within the bounds of the law,” he said.

Marzouki, who heads a centre-left party but has presided over a government dominated by moderate Islamist party Ennahda, said that the party’s long suppression under Ben Ali had opened the way to extremism.

“By suppressing Ennahda as a moderate, peaceful Islamist movement, Ben Ali opened the way to Islamist forces who had received training in Afghanistan before returning to Tunisia,” the president said.

Belaid was gunned down outside his Tunis home in broad daylight on February 6, in the most serious in a spate of attacks blamed by the government on radical Salafists.

But relatives of the vocal critic of the Islamist-dominated government have blamed his killing on Ennahda, a claim the party strongly denies.

Ennahda prime minister Hamadi Jebali stepped down after his party refused to back his efforts to defuse the crisis by forming a government of technocrats.

Despite concessions by the party, his designated successor, Interior Minister Ali Larayedh, acknowledged on Tuesday that he did not know when he would be able to announce a new government even though by law he has only until Saturday to finish the task.

Defence Minister Abdelkarim Zbidi, an independent who took office straight after the revolution, announced later on Tuesday that he had rejected a request from Larayedh to stay in post.

“I cannot go on as there is no clear roadmap for holding fresh elections in the best possible conditions and as quickly as possible,” Zbidi told Tunisia’s Nessma TV.

The 63-year-old was the only minister to remain in post after Ennahda swept October 2011 parliamentary elections.

He is credited with working closely with chief of staff General Rachid Ammar to keep the armed forces above the political fray despite repeated extensions of a longstanding state of emergency that gives the security forces sweeping powers.