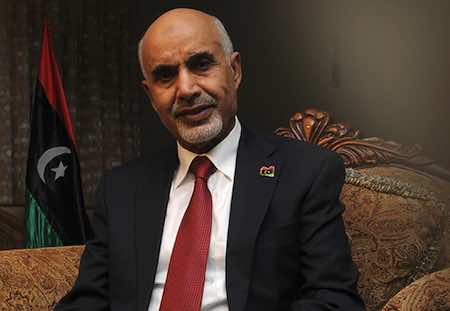 The car of Libya’s interim leader came under fire in Tripoli as he left a chaotic session of the national assembly disrupted by protesters, without causing casualties, the interior minister said Wednesday.

“The car of the General National Congress speaker (Mohammed al-Megeryef) came under fire as assembly members left in a state of total confusion” on Tuesday night, Ashur Shwayel told a press conference.

The demonstrators who disrupted the session of the General National Congress, the highest authority in Libya, in effect making Megeryef the country’s interim leader, were armed and some carried explosives, said the minister.

Dozens of protesters insisting the national assembly adopt a bill banning from politics associates of former dictator Moamer Kadhafi blocked MPs from leaving the meeting room in a southern suburb of Tripoli.

The official news agency LANA, quoting an assembly official, said Megeryef’s car came under heavy gunfire. It was unclear if the attack was “an assassination bid or a collateral incident,” the official said.

The bill is controversial because it could put more than 30 members of the General National Congress out of office, including al-Megeryef and even Prime Minister Ali Zeidan.

Proposed in December, the bill would ban from politics all officials of the Kadhafi regime and their associates.

Only earlier on Tuesday, the national assembly building was returned to its members after a month-long occupation by former rebels demanding compensation for injuries in the 2011 revolution that ousted Kadhafi, a security official said.