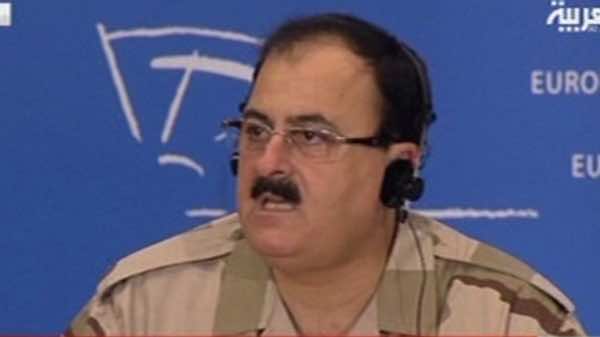 Brigadier General Salim Idriss, the current Chief of Staff of the Free Syrian Army, accused Iraq Wednesday of interfering in Syria based on Iranian orders.

Idriss was referring to recent cross border attacks on FSA positions by the Iraqi armed forces, but said the rebel army does not want any side conflict with any Arab state.

Idriss came to Brussels on Wednesday to plead with the international community to supply it with arms and ammunition so it can resist attacks by the regime of Syria’s President Bashar Assad.

Syria’s uprising began in March 2011 with protests against Assad’s authoritarian rule. When the government cracked down on demonstrators, the opposition took up arms and the conflict turned into a full-blown civil war. The United Nations estimates that more than 70,000 people have been killed.

Idriss complained that Russia and Iran are helping the Assad regime, while the West condemns Assad but does not supply the rebels with weapons.

“If we have the arms and munitions we need, we can get rid of the regime within a month,” Idriss said. “We’re making real progress. A great deal of the east of the country has been liberated. “

The European Union has a blanket arms embargo in place against Syria. Britain has pressed for the embargo to be loosened to allow more aid to the rebels. But other EU countries contend that more arms is the last thing Syria needs.

The U.N. refugee agency said Wednesday that the number of Syrians who have fled their war-ravaged country and are seeking assistance now exceeds 1 million.
Alarabiya