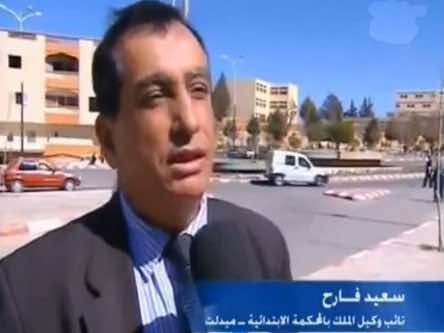 According to some news report, the Vice-Attorney General General of Midelt, a small town 191 km of Meknes, was suspended from his function by the Ministry of Justice, following a complaint by a mechanic who accused the justice official of forcing him to kiss his feet as a condition to forgive and release him.

The incident dates back to February 16 when  Said Fareh, Vice-Attorney General, verbally and physically abused a mechanic after the latter refused to immediately take care of his request.

Less than a week after the stir caused by the alleged humiliation inflicted on a mechanic by the judicial official, the pressure of rights groups and the public quickly paid off.

The Attorney General of the tribunal of first instance of Meknes, announced a week after the opening of an investigation over the allegations of Hisham Himmi, the mechanic who said he was humiliated by the vice-Attorney General of Midelt.

Three days after the incident, Hicham Himmi, the reported victim of this incident, dodged a complaint to the Attorney-General to the court of appeal in Meknes.

The Moroccan Association for Human rights on Wednesday 20 March organized a sit in in front of the court of the first instance in Midelt, seeking justice for Hicham Himmi.

Mr. Said Farah, the 53-year-old vice-Attorney General had denied the accusation directed at him, adding that the alleged victim “threatened to kill him.”

He went on to say that the mechanic was “under the influence of drugs”, adding that “he has got close relatives who belong to Justice and Charity Party, as well as the Justice and Development Party.”