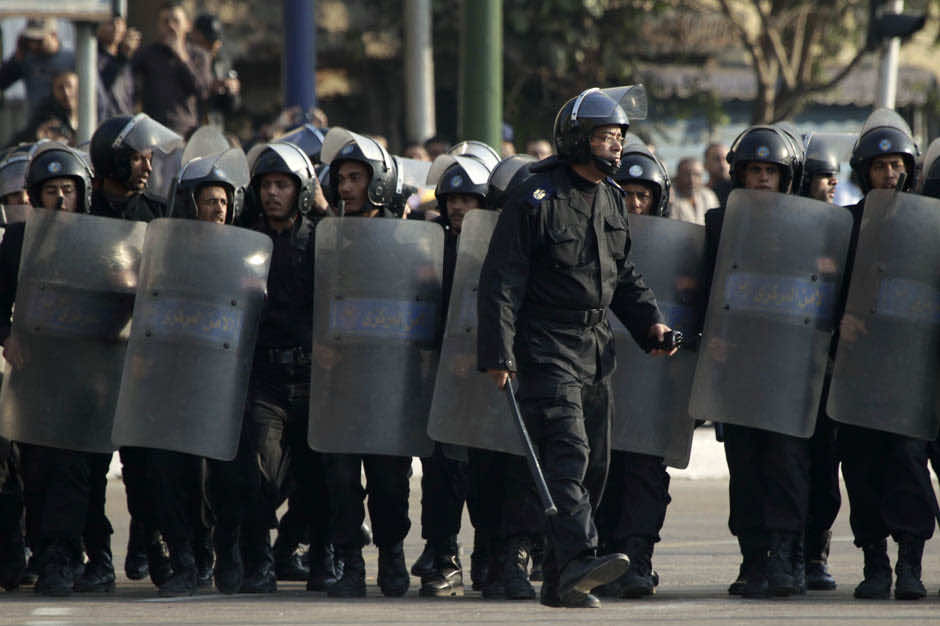 Residents of Port Said, plagued by weeks of deadly clashes between protesters and security forces, say they want the reviled police force out of their canal city and the army to take control. Such is the disdain for the police that residents have taken to providing their own security services, setting up a makeshift security post in a public park dubbed “The People’s Police Station.”

“It may not be a real police station, but it’s a real sign of objection,” said engineer Mohammed Hashem, 40. ”So far we have had 480 reports, we provide traffic duties. We are providing citizens with what the police have failed to give: safety and security,” said Mohamed Ali, 33.

Tensions between police and residents of the Suez Canal city go way back but a deadly football riot last year — which many residents blamed on the police — ushered in a drumbeat of tragedies for the strategic city.

The police were responsible for the Port Said stadium massacre which has caused all this destruction,” Hashem told AFP, echoing comments of many residents who believe police stood by while rival fans laid into each other.

The clashes at the stadium in February last year between fans of home side Al-Masry and Cairo’s Al-Ahly left more than 70 people dead and sparked days of violent protests in Cairo, in which another 16 people were killed.

Many Egyptians believed the rioting was orchestrated either by the police or by supporters of ousted president Hosni Mubarak.

Almost a year after the tragedy, on January 26, a court in Cairo sentenced 21 supporters of the Port Said team to death.

The sentence triggered a series of deadly clashes that killed over 40 people which in turn prompted a campaign of civil disobedience that has now entered its third week.

The residents are furious at the interior ministry but have also lashed out at Islamist President Mohamed Morsi, saying he has ignored the blood that has been spilled.

“We don’t feel safe with the police here. They protect their interests and not the citizens,” said one resident, as others around him showed spent cases of birdshot and tear gas.

“The police have treated us with condescension and scorn for years. They provoke us and start the violence,” said Hassan Saber, 62, who runs a shop. He was speaking near the security headquarters of the city, which on Tuesday was set ablaze by protesters for the second day in a row.

Protesters also torched several security buildings and there was an attempt to attack the security chief’s villa. ”The government and the interior ministry are colluding to fight us. We throw rocks at them and they respond with bullets,” said Ibrahim al-Sayyed, 56.

In most of the city, police are absent from the streets as the violence rages. Riot police appear from time to time to quell protests before disappearing again.

With no end in sight to the violence, residents are turning to the army.

At the entrance of the city’s port, a large banner reads “We welcome the military”, while other banners across the city stress that “the people and the army are one.”

Petitions have even been circulating calling on the army to take full control.

“We called everyone for help and we were ignored… Now we are calling on the Egyptian army to help,” said Mohammed Adel, 34, who owns a travel company and is one of the coordinators of the signature campaign.

“The armed forces are capable of running our city because we have completely lost faith in the president and the interior ministry,” Adel told AFP.

“Only the army can end this chaos,” said Sameh Sweilam, 26, who is collecting signatures urging army chief Abdel Fatah al-Sisi to rule the country.

Residents of Port Said and other canal cities have long complained that Cairo marginalises them. But the feeling of isolation has deepened since the January crisis.

“Morsi has proved incapable of managing anything. We want the army back immediately,” said Mahmud al-Sayyed. But others still recall the turbulent military rule after longtime president Hosni Mubarak was toppled, which saw its share of deadly clashes and political turmoil.

“The army won’t be very different from the police,” said Ahmed al-Arabi, 24.

Military police had deployed to protect vital establishments around the city’s main roads since Morsi declared a one-month state of emergency following the January clashes. But in the city’s smaller streets, groups of civilians work to keep the traffic flowing.

“We dont’ need the police anymore, we are the police,” said Ahmed Eid.