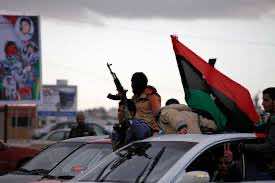 Gunmen stormed the headquarters of a private Libyan television station on Thursday and took away the channel’s owner and four journalists, parliament’s human rights commission said in a statement.

Alassema TV owner Jomaa Al-Osta and four of his staff were abducted by unknown assailants, the statement said.

The commission urged the interior ministry “to intervene immediately to release the prisoners.”

Mohammed al-Sharkassi, an anchor at Alassema TV, told another news channel he was seized briefly outside his workplace by “individuals who identified themselves as former rebels.”

Speaking on Libya al-Ahrar television, Sharkassi said he was questioned by  He said his abductors were “former rebels from Tripoli… angered by the editorial policies of Alassema TV.” He did not elaborate. his abductors and told he would be freed “on condition that I leave Tripoli.”

He said his abductors were “former rebels from Tripoli… angered by the editorial policies of Alassema TV.” He did not elaborate.

The station is known to be close to the liberal coalition which came ahead of Islamists in last July’s legislative elections.

Mahmud Jibril, who heads the National Forces Alliances coalition, was an architect of the 2011 revolt that toppled Moamer Kadhafi.

Libya al-Ahrar said that several attackers, some of them armed, stormed the headquarters of Alassema TV on Thursday afternoon.

“They entered through the windows,” it said.

An AFP reporter said security forces were deployed outside Alassema TV after the attack.

Private newspapers and television stations have flourished in Libya since the ouster of Kadhafi who had banned private media and any criticism of more than four decades of his iron-fisted rule.