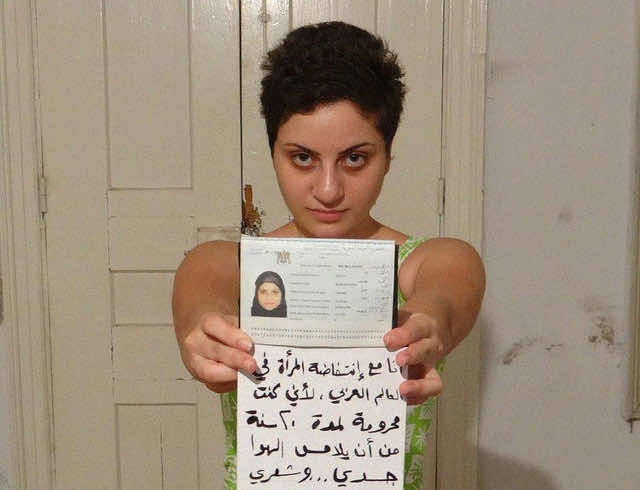 There has been a mainstream ideology (if we can call it that) preaching for women’s emancipation through unconventional patterns of feminist mindsets. A woman’s body is but her own; if we are to sermonize such doctrine, I guess it is wise enough to state what we are to change, improve or get rid of as pro-feminist.

Commenting on a Facebook post portraying the Egyptian actress and belly-dancer Samia Gamal, I stated the following: “Freedom isn’t showing inappropriate parts of the body! Freedom isn’t uncovered flesh! Freedom is to practice your right of changing how you, women, have been falsely stigmatized as sex objects, submissive creatures or rather subordinates to men. If you show me what you actually can do/create, then I’ll respect the producing entity you are rather than the body you live in. Perhaps I might have been surprised that my words generated a flood of negative feedback (and I will surely prove why later), I have to say that I wasn’t (as I will also demonstrate).

Among the feedback received, a comment thread was: “Women are free to do to their bodies whatever they want.” All of the ranting about respecting or not respecting women based on their looks is just another way of oppression. “Women are not an object and you do not get to decide who and how people deserve respect.” [So does this line of thought mimic or work within a feminist framework?  Before I can analyze the aforementioned criticism, I first need to address some keywords, namely: free, bodies, ranting, looks, oppression, object and respect. Indeed, these words, in my opinion, carry and transmit the ideology I question.

Free, as it implies, means having legal and political rights not bounded, confined or detained by any nature of force. Unquestionably, this relates to all domains, creative thinking and human practices, amongst them feminist cognition. Howsoever, the word ‘freedom’ is so exploited by modern feminisms – whatever they are, no matter how innocent they might sound – to defend women as a cause. The question is, what freedom are we talking about? Plenty has been said and less proven, relatively, related with the term. Freedom, from some modern feminists’ perspective (one I reject, even while I do consider myself a modern feminist), lies in enabling a woman, no matter who she is, to uncover her body; this is explained by the right to own one’s body, with no attention paid to the socio-economic, cultural or religious realities to which she belongs. How so? Women, the activist specimen, have been asking for more right and less oppression, for patriarchal societies have been deemed to do so. Still, there remains to be some illumination and illustration of what they mean by “freeing” women.

Bodies, more specifically, women’s. Bodies that, for not a recent past, have mattered, though I am certainly not saying they no longer do. Simone de Beauvoir, and later her successor Judith Butler, worked through and within the same feminist lineage: women’s bodies are constructed by the cultures surrounding them. “One is not born, but rather becomes, a woman,” Simone de Beauvoir would say.[1] Based on such an assertion, right after birth, we are given roles and are socially shaped accordingly. Correspondingly, a girl is ought to doll-play, a boy is ought to gun-play and we are to interact with them in a manner society deems ‘normal.’ Those are norms that postdate us in time; but persist in mentality. Yet, modern feminists, following such faulty logic, do not comprehend what both, Simone de Beauvoir and Judith Butler, founded. It goes beyond uncovering the covered. Displaying a woman’s body is not deconstructing “performances;” it is a sheer practice of what society dictates to and about women, portraying women according to how it, at least the patriarchal facet, wants them to be seen.

Looks known to be misleading and yet widely admired. Human interactions are look-bound. We base our first impressions on people’s appearances and the way they want to be looked at. That is a superficial approach to “looks.” By superficial, I imply there is a profundity missing in analysis and vision; “looks” relate to what a feminist is perceived to look like as well as to “nudity.” Mainstream culture tends to “look” at feminists as men-haters, and patriarchally noncompliant. I, of course, assume that these traits are opposed to the norms that society, reinforced by religion, has set up as “normal.” I say this is “turning around a bush.” Feminism is not all about how a feminist looks; it is far beyond that. I believe feminism serves the interest of women as long as it does not fall in the trap of marginalizing the other, most specifically men, or degrading the image of women through reversed clichés; I mean proving men wrong by means of perpetuating the same, though prospectively modified, images of women.

Oppression is an unjust or cruel exercise of authority or power. Accordingly, while we refer to oppression, from a feminist perspective, we examine the relation between patriarchal societies and women within. Most societies have been deemed patriarchal no matter what or how many rights women cherish. I, hereby, don’t claim the opposite: women’s status quo changed from a hundred percent male-founded-oppression into complacency on the part of women. I adhere that women have been and still are falsely treated and deprived of rights when it comes to the work and family sphere. It is only recently that staunch patriarchal societies, such of Arab ones, have reconsidered the position of women within the scope of the overall society and approved the fact that there has to be some change when it comes to the roles women play in their communities. However, I think that oppression – or at least the way this word is all too often used in popular discourse – has transcended the simple fact that women have to have rights to women depriving themselves of their own legitimate right of distinction. I say so because the quest for rights has digressed to entail issues as unnecessary as non-heterosexuality with third wave feminism.

Objectification, or the practice of using the female body as an object for consumerist interests. This term has been used so extensively and even recklessly that it has become overly vague. Is it looking at a woman as just a source of sexual attraction? Is it the pictures and scenes we see on ads? Or is it women themselves trying to cope with so-called modern fashion? When we talk about objectifying, we ought to identify our reasons behind calling it so; what makes us think women are being objectified, how, and why this happens to certain but not all categories. Food for thought.

Last but never the least, respect. This latter sums the whole deal up. I mean respect should be the one and only faith that governs our intentions, thoughts and actions. If we go back to the quote, we can relate respect to deserving. Who gets to decide if a woman is worth being respected or not? And on what criteria is such respect based? This takes us back to the idea of derailing what some feminists – or at least some who claim to be feminists – call for and the alien feminist ideas constructed around it. It all started and should remain as simple as promoting women’s position and gaining more rights as long as these rights remain logical. The thing is, I think this is almost like a rhetorical question, which came first the chicken or the egg? Is respect earned, given or it has to do with one’s perception of him/herself? I believe respect starts within ourselves; we get to determine whether we deserve to (not necessarily be respected) share respect in our miniature communities and society in a wider scope. Hence, no one has the right to underestimate us nor do we have the right to trespass certain limits that we share with other people; this is how we maintain human relationships.

To discuss such concepts as emancipation and gender equity, it is not about transcending the simple physical differences to some sort of levity, but, the potentials women could force to stand out and allow their femininity to parallel masculinity. By the aforementioned, I refer to French feminist, Helene Cixous, who says that:

The ‘economy’ of her drives is prodigious, she cannot fail, in seizing the occasion to speak, to transform directly and indirectly all systems of exchange based on masculine thrift [manipulation]. Her libido [I presume her true intellect far beyond the sheer physical existence] will produce far more radical effects of political and social change than some might like to think.

Dana Bakdounes, a Syrian woman, uploads a photo of herself onto Facebook. (Photo from ‘The uprising of women in the Arab world’ Facebook page)