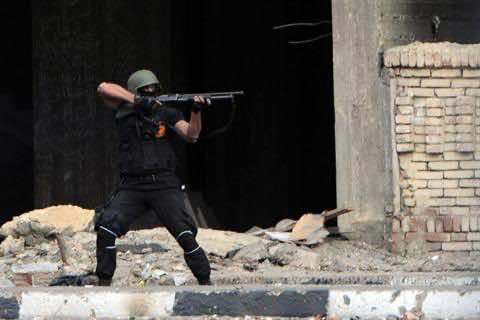 An Egyptian protester was shot dead in overnight clashes in the restive city of Port Said when police fired on protesters outside their headquarters, a doctor said on Friday.

Karim Sayid Abdel Aziz, 33, died of a bullet wound to the head, said Dr Mohammed Arnous who treated him in a Port Said hospital. Abdel Aziz had been shot three times.

A medic told AFP that 73 people were wounded in the clashes, including five people who suffered bullet wounds and 19 who were hit by birdshot.

The clashes on Thursday resumed after protesters marched on the police headquarters, which they had already set ablaze on Tuesday, chanting “the interior ministry are thugs,” an AFP correspondent reported.

Police fired tear gas and then birdshot as soldiers, deployed in the city since late January, moved in to guard the police building.

The unrest in the Suez Canal city, fuelled by January death sentences handed down to football fans over deadly rioting last year, flared again on Sunday, with six people, including three policemen, dying in the clashes.