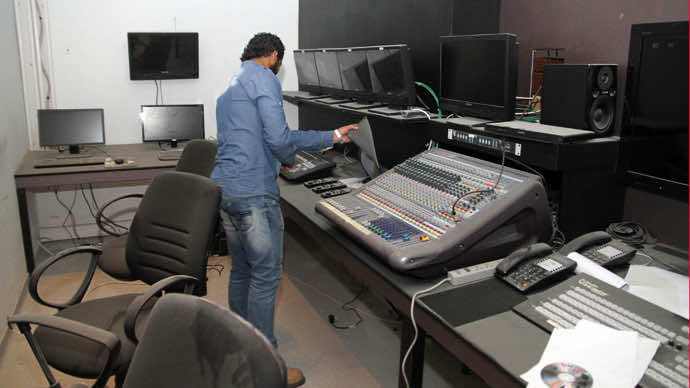 The owner and former director of a private Libyan television who were seized by gunmen in a raid on the channel’s headquarters were freed on Friday, the station said.

Unknown assailants stormed the building of Alassema TV on Thursday, abducting the owner Jomaa Al-Osta and the former executive director Nabil al-Shebani, as well as four members of staff, including journalists and anchors.

Alassema announced their release on Friday.

“Liberation of Joma Al-Osta and Nabil al-Shebani,” a brief message said. Osta’s brother confirmed that the two men had been freed by their captors.

“My brother and Nabil al-Shebani have been released. Jomaa is now with us at home,” Ibrahim Al-Osta told AFP.

The staff members, who were all released soon after Thursday’s abduction, said the kidnappers were angry about the editorial policies of the TV station, which is known to be close to Libya’s liberal coalition that came ahead of Islamists in last July’s legislative elections.

Mohammed al-Sharkassi, an anchor at Alassema TV who was among those released, said the assailants “identified themselves as former rebels.”

They objected, in particular, to a draft law that would exclude from political life officials under the regime of former dictator Moamer Kadhafi, who was ousted and then slain in the 2011 uprising.

The law has caused a stir among Libya’s ruling elite as it threatens to sideline senior political figures, including Mahmud Jibril, who heads the National Forces Alliances coalition and was an architect of the 2011 revolt.

Media watchdog Reporters Without Borders on Friday condemned the attack and expressed deep concern about the fate of Osta and Shebani, calling on the Libyan authorities to “take all necessary measures to obtain their release.”

Libya’s national assembly called on Thursday evening for the interior ministry “to intervene immediately to release the prisoners.”