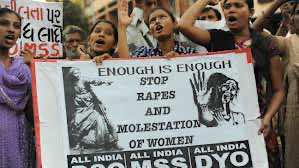 The Indian gang-rape victim whose brutal death shocked the nation and the world was among nine women honored by the United States on Friday for their courage.

The young student, who has become known simply as “Nirbhaya” or “fearless,” was awarded the US International Women of Courage award posthumously after she died of massive internal injuries following the rape and attack on a Delhi bus.

“Her bravery inspired millions of men and women to come together with a simple message ‘No more,'” US Secretary of State John Kerry told a ceremony at which the 23-year-old was honored.

“We never imagined that the girl we thought was our daughter would one day be the daughter of the entire world,” her parents wrote in a message to the ceremony that was read out by Kerry.

“While her end was horrendous, her case is imparting strength to all women to fight and to improve the system. Women in India and the rest of the world refuse to be stigmatized and will not keep silent any more.”

Three other women were also absent from the event held at the State Department.

Tibetan poet Tsering Woeser was denied a passport by Chinese authorities to travel, Vietnamese blogger Ta Phong Tan is under house arrest and Syrian human rights lawyer Razan Zeitunah is in hiding for her safety.

“I see how much work we still have to do,” Kerry said at the annual event held to mark International Women’s Day.

First Lady Michelle Obama said that “when these women witnessed horrific crimes or the disregard for basic human rights, they spoke up, risking everything they had to see that justice was done.

“With every act of strength and defiance, with every blog post, with every community meeting, these women have inspired millions to stand with them and find their own voices, and work together to achieve real and lasting change.”

But the event was marred by news that the award to Egyptian activist Samira Ibrahim was canceled at the last-minute after it was discovered she had made statements praising the September 11, 2011 attacks and the killing of Israelis.

“It’s unfortunate, but it was the right thing to do,” State Department spokeswoman Victoria Nuland said, adding that Ibrahim’s statements on her Twitter account “didn’t comport with out values.”

“There were obviously some problems in our review process,” Nuland admitted.

Woeser, who has written on Tibetan issues for decades, said she was unable to leave China to receive the award, after being routinely denied a passport. She had applied in 2005 and last year.

But Woeser said she would dedicate her award to self-immolators. “I’ve been writing about them, and feel sad about them,” she said.

Also among those honored were the first female member of the Afghan National Interdiction Unit, Malalai Bahaduri, whose uncle broke her nose when she told him she was going to pursue a career in law enforcement.

Russian journalist Elena Milashina, who has endured threats and attacks for her work exposing drug traffickers and the killings of reporters, and Nigerian democracy campaigner Josephine Obiajulu Odumakin also got the nod.

The final two awards were given to Somalian activist Fartuun Adan, who heads the Elman Peace and Human Rights Centre, and Honduran Julieta Castellanos, who helped formed an umbrella organization of civil society groups following the 2009 coup.