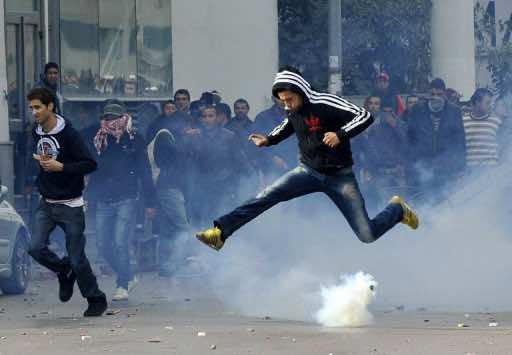 Tunisia’s new coalition government unveiled by Islamist Ali Larayedh faces the mammoth challenges of drafting a much-delayed constitution, defusing the threat of radical Salafists and tackling unemployment and poverty which fuelled the 2011 uprising.

More than two years after the mass protests that toppled former dictator Zine El Abidine Ben Ali and set off the Arab Spring revolutions in several countries, Tunisia is still struggling to rebuild its institutions.

Parliament remains divided over the future political system, with the powerful Islamist Ennahda party pushing for a pure parliamentary system while other parties demand that the president retain key powers.

Larayedh unveiled a cabinet on Friday with key portfolios handed to independent and little known figures, in a clear concession by Ennahda, and announced that the new government would step down by the end of the year.

The 57-year-old former interior minister and Ennahda figure said his cabinet would work “to the end of 2013 at the latest,” on the assumption that a new constitution has been adopted and legislative and presidential elections held in the meantime.

He declined to speculate on when the elections would be held, saying that was a prerogative of the assembly, but suggested they could be in October-November.

But his hopes could be dashed, according to the findings of a report published by an NGO whose members monitored the work of MPs.

The report by La Boussole watchdog accused parliamentarians of slackness.

“We noted that on average the sessions opened 73 minutes late and sometimes two hours and 45 minutes late” because of a lack of quorum, it said, adding that since January an average of just 90 out of 217 MPs were present.

La Boussole head Amira Yahyaoui estimated that at such a rate elections cannot take place before the beginning of 2014.

Another key challenge facing the government is security in Tunisia, where a state of emergency has been in force since the revolution.

The murder of Belaid, a vocal critic of Ennahda, has been blamed on Salafists, ultra-conservative Muslims whose influence has grown in the once proudly secular nation.

The killing sparked clashes between protesters and police and prompted the largest anti-government demonstration since the revolution.

The opposition has accused Ennahda and Larayedh of complacency in dealing with the Salafists who have been implicated in a wave of violence, including an attack on the US embassy last September and others on Sufi shrines.

Government critics have also demanded the dissolution of the League for the Protection of the Revolution, a militia allied to the Ennahda party which the opposition accuses of brutal acts of violence.

But Ennahda has steadfastly refused to disband the militia.

“We will seriously confront all those who defy the law,” Larayedh said on Friday.

Finally, the premier-designate must find a way to appease growing social unrest over the government’s failure to reduce poverty and unemployment — driving factors behind the mass uprising that brought down Ben Ali’s regime.

Taxi drivers and petrol stations have already warned they will go on strike to protest a sudden decision this week by the government to increase petrol prices.

The political uncertainty hovering over Tunisia is taking its toll on the economy, crippling foreign investments and threatens a recovery of tourism which accounts for seven percent of GDP and employs 400,000 Tunisians.

“The situation has become untenable on the economic and social fronts,” the flagship La Presse newspaper said recently, stressing that investors needed clarity.