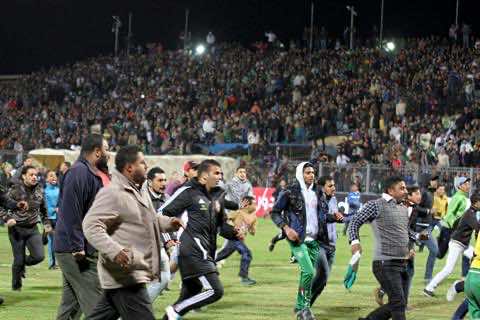 An Egyptian court on Saturday upheld death sentences for 21 defendants over a deadly football riot in Port Said, in a case that has already sparked widespread violence and threats of further unrest.

The court, sitting in Cairo for security reasons, also handed down life sentences to five defendants, with 19 receiving lesser jail terms and another 28 exonerated.

In Port Said, home to most of the defendants, shops were shuttered in anticipation of further violence after dozens died in clashes with police after the initial death verdict against the 21 of the 73 defendants in late January.

Several hundred grim protesters marched on the Suez Canal and a port in the city as military helicopters flew overhead and troops stationed tanks outside the port.

In Cairo, fans of Al-Ahly football club, whose members were killed in the February 2012 stadium riot in Port Said in which 74 people died, gathered outside their team’s headquarters to mull their next move.

The Ahly fans, who have a reputation for organising sometimes violent protests, had warned police that they would retaliate if the defendants, including nine policemen, were exonerated.

The court sentenced two senior policemen to 15 years each — former head of police security General Essam Samak and Brigadier General Mohammed Saad, who at the time of the riot was responsible for the stadium gates, which were locked.

A lawyer for 11 defendants, eight of whom were acquitted and one received a life term, said he would appeal the sentences.

“It’s a political ruling. This judge tried to achieve a balance, but everyone is displeased with the rulings,” Ashraf al-Ezzabi told AFP by phone from outside the heavily secured courtroom in Cairo.

The football riot trial has been a ticking time bomb for Islamist President Mohamed Morsi, who came to power last June.

Morsi faced unrest in several cities in the country and also an unprecedented strike by riot police who refused orders to deploy, saying they are ill-equipped to deal with violent protesters and were made to suffer the consequences of government mistakes.

In Port Said, the government has almost completely lost its grip on security.

Police on Friday withdrew from their headquarters and handed responsibility for securing the flashpoint headquarters to the military, deployed in the city since late January.