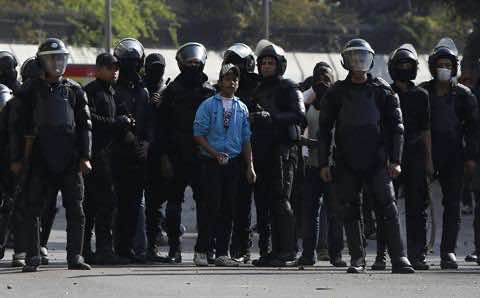 Egypt’s interior minister pleaded on Sunday for an end to “rumours” of police abuse, saying his forces had never fired a single shot at protesters since the start of the 2011 uprising.

Mohammed Ibrahim, who is facing an unprecedented strike by thousands of police officers across the country calling for his resignation, told reporters the media was waging an attack against the ministry and spreading lies.

“The police is being attacked all day in the media. Why the rumours? Why the attacks?”

He said people were making up stories of torture in police custody and accusing the police of shooting protesters, which is “untrue.”

The police have been engaged in violent clashes with protesters across the country for months, and local and international rights groups have accused the force of unlawful killings.

Clashes in the canal city of Port Said in January following 21 death sentences handed down to supporters of a local football team left more than 40 people dead.

“Evidence gathered… indicates that the police began shooting when they came under fire on January 26, but continued shooting after the threat against them receded, killing and wounding a number of protesters and bystanders,” Human Rights Watch said in a statement last week.

But Ibrahim insisted that police have never fired on protesters.

“We haven’t fired a single shot since January 25. Not a single shot,” he said in reference to the start of the 2011 uprising that toppled long-time president Hosni Mubarak.

He said his forces were being attacked and called on political factions to withdraw their people from the streets “so we can tell the difference between a thug and a protester.”

Ibrahim said the police were under immense pressure, which is why the officers were on strike.

Thousands of policemen have refused to obey orders and some have locked police stations demanding the minister’s resignation, accusing him of being too close to President Mohamed Morsi’s Muslim Brotherhood and of using them as pawns in a political battle.

But Ibrahim painted a more unified front, saying that the strikers were a minority and added that he himself wanted to be kept out of politics.

“We call on everyone to keep us out of their equations. We don’t belong to any faction, ideology, opposition,” he said.