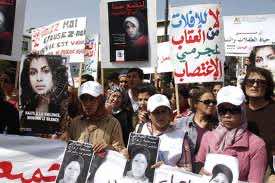 Underage marriage continues to represent a sensitive legal and political issue in Morocco.

Even though Article 19 of the family code adopted in 2004 prohibits marriage for anyone below 18 years of age, the phenomenon of child marriage is still a reality in Morocco. It continues to grow, and causes irreparable negative social consequences.

According to AFP TV, official figures show that the number of child marriages in Morocco has risen to more than 35,000 in 2010 up from 30,000 two years before.

“Married at 13 and illiterate, the young bride said she nearly escaped death at the hands of her husband. He divorced her after one year of marriage. Even though he abused her, he remained a free man” reported an AFP video on its YouTube channel.

“The country’s Islamist Justice and Development Party wants to make 16 the minimum age for marriage, while the defenders of women’s rights have called for an outright ban on the marriage of minors,” added the report.

In March 2012, Morocco was shocked by the suicide of Amina Filali, a 16-year-old girl, who was forced to marry the man who had raped her. He remained a free man in accordance with Article 475 of the country’s penal code that allows a rapist to escape prison by marrying his victim.