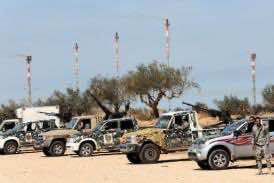 Supplies of Libyan natural gas to Italy via the Greenstream pipeline have resumed after a week-long interruption caused by clashes between former rebels, the Mellitah Oil and Gas company said on Sunday.

“The flow of gas to Italy resumed on Saturday at a normal rate,” said a source at the company, which operates a gas complex that was evacuated on March 2 after an exchange of fire between armed groups nearby.

The gas complex to the west of Tripoli pumps up to 17 million cubic metres of gas to Italy daily, via the 516 kilometre pipeline that runs from Mellitah to Gela in Sicily.

Clashes broke out there last weekend between former rebels from the towns of Zintan and Zwara who had been placed in charge of security at the complex, with one person killed and several wounded according to Libya’s deputy oil minister.

On Monday, the Libyan army managed to intervene between the rival groups and take control of the site.