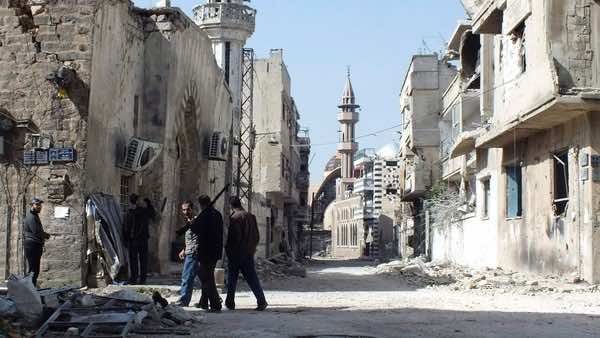 Syrian warplanes on Sunday bombed the Baba Amr district of Homs hours after insurgents attacked the former rebel stronghold that was devastated by an army siege last year, a watchdog said.

“The air force is bombing Baba Amr,” which thousands of residents have returned to since it was taken by the army last March, said Syrian Observatory for Human Rights director Rami Abdel Rahman.

Rebels had launched a surprise dawn attack on the battered Homs neighborhood for the first time since they were driven out by the army a year ago in a bloody campaign that lasted more than a month and left hundreds dead.

The Observatory said the central Syrian city was “completed surrounded” by the army, and that “no one has the right to enter or leave.”

Regime troops closed off several roads around Baba Amr, which was almost entirely under siege.

Previously, Syrian opposition fighters said they gained control of Baba Amr after it was reported that the fighters launched a surprise dawn attack on the former rebel stronghold.

Activists at the Local Coordinating Committees in Syria reported that Baba Amr had been taken by the fighters, hours after another activist group reported their dawn attack.

“At dawn, the rebels launched a surprise attack on Baba Amr, which they have entered,” Syrian Observatory for Human Rights director Rami Abdel Rahman, who was in contact with the rebels, told AFP.

“The rebels infiltrated Baba Amr during the night. Those manning the army checkpoints barely had time to realise what was going on,” said Omar, an activist who was also in touch with the insurgents.

The Homs district gained notoriety when hundreds of Syrians were killed last year during more than a month of army bombardment and combat with the outgunned rebels, who were finally driven out by troops loyal to President Bashar al-Assad.

Reflecting its importance to the regime, Assad visited the devastated district on March 27 to mark the “victory” of his troops, and made promises broadcast on state television that Baba Amr would rise again and return to “normal life.”

As well as those killed in the siege, dozens of bodies were found in neighboring districts of Homs, and included those of people fleeing the fighting in Baba Amr, according to the Observatory.

Two foreign journalists, American reporter Marie Colvin of The Sunday Times in Britain and French photojournalist Remi Ochlik, were among those killed in the fighting when a makeshift media center in Baba Amr was shelled by Syrian forces.

The army, which controls around 80 percent of Homs, launched an offensive several days ago aimed at capturing rebel enclaves, notably in the northern Khaldiyeh district and in the old city, using helicopters to bombard them.

“Thinking that the situation was under their control in the other districts, the army reduced its presence there, concentrating in particular on retaking Khaldiyeh,” said the Observatory’s Abdel Rahman.

“The rebels took advantage of the situation with a surprise attack on Baba Amr,” he added.

The soldiers in Homs also appeared to have been distracted by a double truck bombing launched last week by the jihadist Al-Nusra Front on checkpoints at the entrance to Syria’s third-largest city, according to the Observatory.