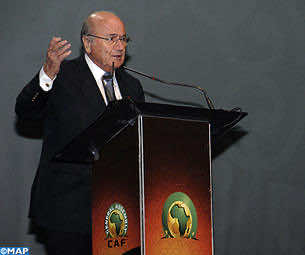 Morocco has made great efforts to promote the national and African football, which led to its being selected to host major football events, president of the International Federation of Football Associations (FIFA), Joseph Blatter, said Saturday in Marrakech.

Blatter said, at the opening ceremony of the 35th Ordinary General Assembly of the Confederation of African Football (CAF), stated that the Assembly is a great day for Moroccan football, because “it is in Morocco that we will organize in December … the FIFA World Club Cup, the first of its kind on the African soil.”

“I would like to say that merit, a great credit, goes to a great personality of this country, I mean HM King Mohammed VI and his personal commitment to continue to develop football and build stadiums and it is because Morocco currently has international-standard stadiums that FIFA has chosen to organize this event on the Moroccan soil,” he said.