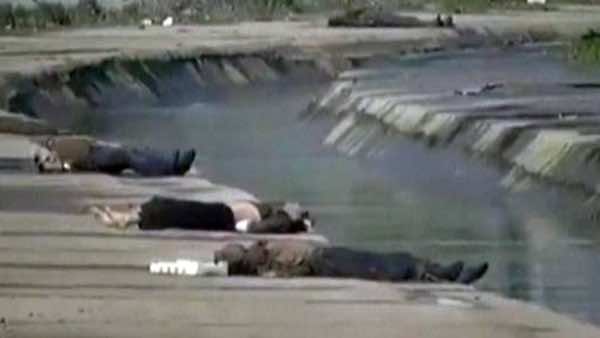 Syrian opposition campaigners said at least 20 bodies of young men shot by security forces were found on Sunday in a small waterway running through the contested city of Aleppo.

It was the largest number of bodies lifted in a single day from what became known as “the river of martyrs”, after 65 bodies turned up in late January. An average of several bodies a day has been appearing in the river since, several activists in the northern city, which is near Turkey, told Reuters.

Most bodies found so far floated down the River Queiq to the opposition-held Bustan al-Qasr neighborhood after being dumped in an upstream district in central Aleppo under the control of President Bashar al-Assad’s forces where several security compounds are located, opposition activists in Aleppo said.

There was no official comment from the government. State media said the bodies found in January were those of people abducted and killed by the al Qaeda-linked al-Nusra Front.

Syrian authorities have banned most independent media, making it difficult to verify reports from inside Syria.

Louay al-Halabi, an activist in Aleppo, said he was present when the bodies were dug up. He added that bodies have been turning up in Quieq when the water level, which is controlled from a government held area, is on the high side.

“I counted 23 bodies today. One man literally had his brainsblown out,” Halabi said.

Halabi said the men appear to have been prisoners at security compounds in government-controlled areas taken either dead or alive to a public park in the center of Aleppo that has been turned into a barracks.

Mohammad Nour, another activist who said he went to the site of the bodies, claimed the men were in their 20s and 30s. He added that they were a mix of civilians and captured rebel fighters.

“Six men were identified so far. Five of them were detained by air force intelligence last week,” he said.

Assad’s forces and rebel brigades have been battling in Aleppo, Syria’s commercial and industrial hub, since last year. The two sides have been accused of carrying out summary executions.