Ifrane - Moroccan Higher education traces back centuries. Karouine University in Fez was built by Fatima EL Fehrya in 859 A.D as the first university in the modern world. 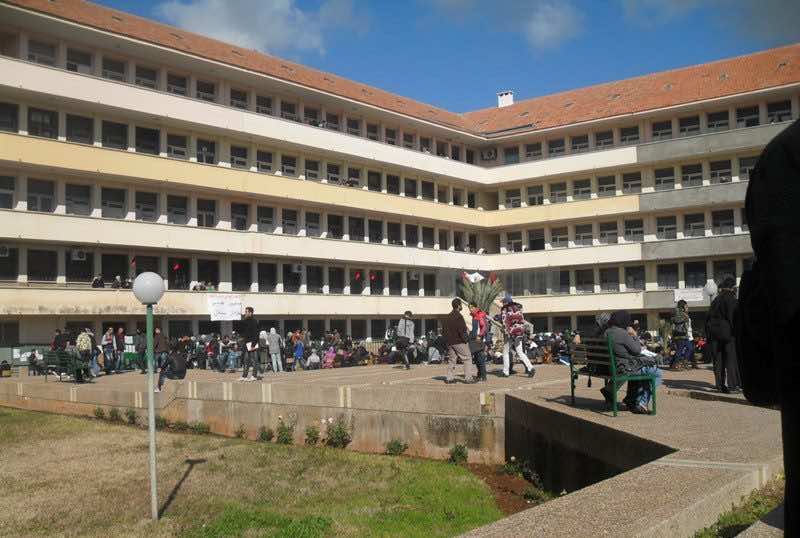 Ifrane – Moroccan Higher education traces back centuries. Karouine University in Fez was built by Fatima EL Fehrya in 859 A.D as the first university in the modern world.

Led by Youssef Ben Tachfin, the Almoravid spread information through advancing the teaching of Islam, philosophy, art and science in Morocco, Andalussya, Tunisia and Algeria. In the thirteenth century, Morocco entered the Merinid era.  During their rule, which lasted for more than two centuries, numerous schools and university centers were founded. Medersa of Ben Youssef in Marrakech, which was inaugurated in the 14th C by Sultan Abou el Hassan, is the most well-known of those established during this period.

After becoming an independent country in 1956, Morocco started creating its own system of higher education, a system that would suit the challenges it faced as a newly independent nation. As Mohamed V said “Now we move from the smallest jihad to the greatest Jihad.” Since that time, Morocco has been aware of the importance of higher educational centers like vocational institutes, colleges and universities.  In that regard, the late King Hassan II stated:

The most precious good or resource of a nation is not its gold or currency reserves, as considerable as such might be. Neither are a nation’s underground wealth or the power of its industry. The power of a nation rests on its human capital and health.[1]

Morocco’s support of higher education centers can be seen in the steady rise of students in these institutions. In 2000 more than 60,000[2] students were enrolled in higher education and training centers in the capital city of Rabat. During the 2009-2010 Academic year, the number of students reached 308 005, in Moroccan public Universities and almost 310 000 in vocational institutes. According to the World Bank, from 1985 to 2000 the average annual growth rate of university enrollment was 6.3 percent and 13 percent from 2000-2010.

There have been noteworthy improvements in Morocco’s material and educational infrastructures since independence in 1956. The 2007 University performance study in the National Report on Human Development demonstrated that the professor/student ratio was 1 to almost 90 in universities and 1 to 52 in technical institutes, while there were 5900 teachers for more than 310,000 students in vocational institutes. According to the 2007 University performance report, Moroccan higher education progressed at an average annual rate of 13 percent during the independence period.

In 2009 about 100,000 Moroccans held degrees, compared to only a few hundred during the colonial era. This massive development reflects the Moroccan policy of decentralizing education, diversifying technical and vocational training, and regularly setting up new higher education centers. After independence, there were only six higher education centers; in 2000 there were more than 70 and now there are more than 450 including public vocational institutes, Office de la Formation Professionnelle et de la Promotion du Travail OFPPT, Some examples are the University Of Sidi Mohamed Ben Abdellah in Fez,University of Mohamed V University in Rabat, University Of Abdelmalek Saidi, Hassan II, University Cadi Ayyad in Marrakech…and Al Akhawayn University.

Although Morocco allocates almost 26 percent of its annual budget to the education sector, it remains unsatisfied with the results; the state has attempted to improve higher education syllabi, to promote student development and to reform university policies and curriculum each term. However, Morocco has not seen the positive results it was hoping for after these education reforms were implemented.

In 2010 about 10,467  professors and researchers worked in Moroccan universities and its annexes with almost the same figure – 9,783 – of administrative staff,  while the vocational public institute has more than 5900 teachers; 73 percent of professors are at the faculty of human and social studies, law and economy. Only 27 percent specialize in scientific, technical, and health care sectors.

Moroccan higher education operates as a public domain under the responsibility of the state, and the 1975 law of higher education is administered directly by the Ministry of Higher Education. This is thus a reflection of the French model. This law governs all the other higher education institutes except Al Akhawyn University, which is not subject to this law. The Royal Dahir of 1993 stated that AUI is a private and autonomous university.

Furthermore, while Moroccan public universities are following the French system – French and Arabic are the languages of instruction – Al Akhawyn University is modeled after the American university system, both organizationally and pedagogically. English is the language of instruction. The 1975 law dictates the purpose of public universities, establishment procedures, their history in Morocco, and the procedures for recruiting professors and staff. It also stipulates procedures for curriculum development and student evaluation.

In 1999 the government laid out the philosophy and policy for the reform of the Moroccan education system in a document entitled The National Education and Training Charter. Statute No 01-00 of May 2000, which became known as the cornerstone of this charter, asked for the implementation of the government’s philosophy on education policy reform. It aimed to establish the educational, administrative and financial autonomy of Higher education centers. This decree calls for the implementation of three key measures:

– The establishment of an accreditation program in public and private institutions of higher education.

– The establishment of an assessment method.

– The establishment of apparatuses in charge of assessing the assessment and regulation of the system.

For the purpose of greater steadiness, the decree No 01-00 -May 2000, created the National Coordination Committee for Higher Education and a National Evaluation Authority. An Emergency Plan for 2009-2012 was also created to promote the swift implementation of these reforms; the plan relates primarily to higher education (university governance and teaching) and the academic research

There are three integral parts branches within the Moroccan public system of higher education:

1. The independent system for the training of future executives (grandes écoles), which falls under the jurisdiction of the relevant specialized ministries.

2. The university system, for which the Ministry of National Education, Higher Education, Executive Training and Scientific Research is responsible.

Morocco owns almost 103 public institutes of tertiary education plus the English-speaking Al Akhawayn University in Ifrane, which has a special status, and other tertiary institutions, which include “écoles d’ingénieur” and institutes of vocational training in addition to 327 vacation Institutes of OFPPT.

Private schools in higher education are currently in charge of almost 10 percent of training needs, but they will ultimately cover 20%, according to Emergency Plan for 2009-2012. Admission applications are examined by the Coordination Committee for Private Higher Education.

Governing Apparatuses of the Higher Education

As public institutions with organizational, financial and administrative autonomy  ,the universities enjoy educational, scholarly and literary autonomy. They are ruled by Presidents elected by the king under the minister of higher education recommendations, a president  who is assisted by vice-presidents with  particular responsibilities, such as international cooperation and scientific research.

Each university, as well as their faculties, has a general council, made up off Deans and elected or appointed members from the head of departments. The responsibilities of the councils are set by committees like the academic, managerial and budgetary control committees.

The general council of the university includes:

– Seven legislative bodies  of business and social organizations, plus  the representative of private higher education

Almost no fees are required to enroll in Moroccan universities. In other words, Moroccan high education is practically free of charge. Each semester, grants are offered by the public authorities to students in need, 850 DH for local students and 1600 DH for rural students. Due to the small number of grant beneficiaries and limited housing capacity students are requested to find their own living accommodations.

The state pays the institutions’ expenditures as well as their operating budgets. The financial scheme is based on the number of students in each institution. That is, institutions with limited access receive less funding in comparison with those with unrestricted access.

– Grants other than those allocated by the Government;

Quality assurance and accreditation of institutions and/or programs

The quality assurance in Moroccan higher education was greatly influenced by Statute No 01-00. This decree stipulated three new initiatives:

– The founding of accreditation programs in public and private institutions of higher education.

– The establishment of an evaluation system.

– The foundation of a regulatory apparatus.

According to these reform procedures, assessment has steadily become a regular process concerning both training curricula and institutions.  Specialized regulating apparatuses were created for this very reason. These apparatuses are The National Coordination Committee for Higher Education, which was created in 2003, and the Coordinating Committee for Private Higher Education, founded in 2005.

Admission to higher education institutions encompasses two main trends. Indeed, a line has to be drawn between institutions with open access like universities, where students can be admitted without any restrictions, and institutions with restricted access, where admissions are limited and competitive entrance examinations are the norm. Such is the case with the specialized “grandes écoles.“

For curricula up to Bachelor rank there is no selection process for entrants. Regarding graduate studies, very limited and selective admission is the norm in both programs.

Admission to a Master’s program is normally only offered to around 30 students.  To pursue research for a Doctorate, Masters Degree holders must introduce his or her research project to an appointed academic committee within that university and must be supervised by a lecturer with the status of professor researcher de l’enseignement supérieur after the candidate research project   has been approved and accredited by that committee.

Syllabus and the academic year

The reforms took place in Moroccan Universities in fall 2003. Syllabuses are planned into cycles, semesters and modules respectively and conducted in Arabic and/or French languages.

One academic year constitutes two semesters. Each semester lasts 16 weeks. During one semester students must go through four modules, no more,   no less, with teaching and assessment time oscillating between 300 and 480 hours per semester for four studied modules -each modules lasts between 75 and 120 hours. The entire module is delivered and assessed over one semester.