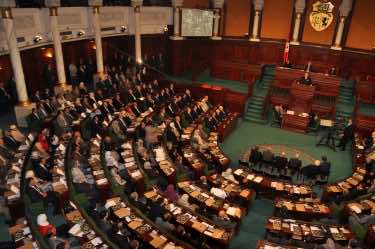 Tunisia’s parliament was Monday debating plans to set April 27 as the deadline for the finalisation of the new constitution and October 27 as the date for the next elections, as part of efforts to resolve a political crisis.

The deputy speaker of the National Constituent Assembly, Mehrezia Labidi, gave the dates in a posting on her Facebook page, as deputies met to draw up a calendar for the adoption of the constitution, as well as for elections.

Labidi, who belongs to the ruling Islamist party Ennahda, did not give a precise timetable for the adoption of the constitution as each article must be approved by an absolute majority of MPs before the entire text is put to a vote.

Unless it is approved by a two-thirds majority, it must be put to a referendum.

Several political timetables drawn up since Ennahda’s sweeping election victory in the first post-revolution poll have not been respected.

More than two years after mass protests that toppled former dictator Zine El Abidine Ben Ali and inspired revolutions in other Arab Spring countries, Tunisia is still without a fixed political system due to a lack of consensus between the main parties.

Ennahda is pushing for a pure parliamentary system while others are demanding that the president retain key powers.

Assembly speaker Mustapha Ben Jaafar has called for an end to the tug-of-war, with the political uncertainty in Tunisia exacerbated by social tensions and the growing influence of militant Islamist groups.

“We must abandon narrow party interests even if that means making sacrifices, retreating. It is in the interests of Tunisians,” Ben Jaafar, whose secular Ettakatol is one of Ennahda’s partners in the outgoing three-party coalition, said at the weekend.

“Our people are patient but their patience has its limits, we must attend to their problems,” he added.

Aside from the parliamentary deadlock, Tunisia has been grappling with a political crisis triggered by the killing last month of Chokri Belaid.

There are hopes that it may finally be able to overcome this crisis, which brought down the government of Hamadi Jabali, when parliament holds a vote of confidence on Tuesday for premier-designate Ali Larayedh’s new cabinet line-up.