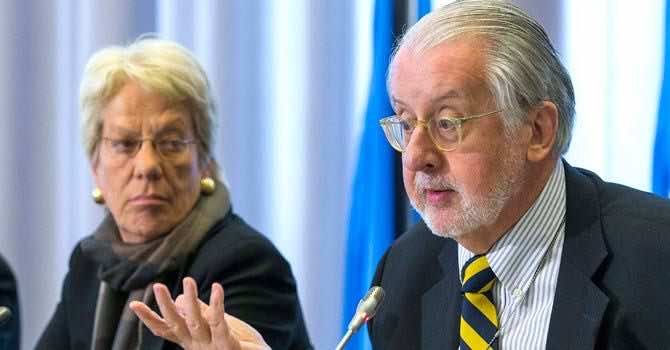 “In a disturbing and dangerous trend, mass killings allegedly perpetrated by Popular Committees have at times taken on sectarian overtones,” the UN commission of inquiry, led by Brazilian Paulo Pinheiro , said in an update to its latest report on Syria .

While the groups were frequently described as government-supporting Shabbiha militias who have been blamed for massacres in the past, Vitit Muntarbhorn, one of the four investigators who make up the commission, stressed that the Popular Committee model sprouting up all over the country was different.

“It is more fragmented… It is more local,” he told reporters in Geneva , where the commission on Monday presented its latest report to the UN Human Rights Council .

The Popular Committees have emerged to protect their neighbourhoods against anti-government armed groups and criminal gangs, the report said, adding that they appear to “mirror the ethnic, religious and class composition of the neighbourhoods they protect.”

They have evolved to reinforce government forces, and “the regime has begun to integrate the Popular Committees along with other sympathising groups in a new paramilitary force called the ‘National Defence Forces’,” it said.

The report also cited witness accounts from people who said they had been “harassed and at times arbitrarily arrested” by members of the groups because they came from areas considered to be “supportive of the revolution.”

Muntarbhorn stressed that opposition forces too have similar allies and that both sides were taking the law into their own hands.

“Some groups are exercising… civilian authority without due process of law,” he said, pointing out that while the commission has listed 20 full-out massacres carried out by both sides, there have been “hundreds and hundreds of unlawful killings.”

The commission meanwhile said that the past two months had seen a rapid deterioration of the situation in Syria , where the UN estimates that at least 70,000 people have been killed in two years of escalating violence, while over one million Syrians have sought refuge in neighbouring countries.

Syrian ambassador Faysal Khabbaz Hamoni lambasted the report, which he told the Human Rights Council was full of errors and based on “testimonials of which the reliability and truthfulness we question.”

While the Syrian regime received backing from a handful of countries at the council, including Cuba and North Korea , most countries voiced support for the commission and demanded immediate international actions.

“The tragedy for the Syrian people has reached really abominable proportions,” US ambassador to the council Eileen Chamberlain Donahoe told reporters, insisting that “the Assad regime bears overwhelming responsibility for the tragedy and destruction.”

The commission — set up in 2011 at the behest of the UN Human Rights Council — has been unable to gain access to Syria since Damascus has ignored its request for entry.

Instead, it has interviewed over 1,500 refugees and exiles as a basis for its reports and its charges that both the government forces and their allies and opposition forces of carrying out war crimes in Syria .

Pinheiro said Monday that the regime forces appeared to be responsible to a larger extent for more far-reaching crimes against humanity in the country.

The commission is set to submit a confidential list of names of suspected perpetrators to the UN human rights office, and has repeatedly urged the deadlocked UN Security Council to refer the cases to the International Criminal Court.

Muntarbhorn insisted that the commission should be given direct access to the Security Council and the UN General Assembly so it can make its case for such a referral.