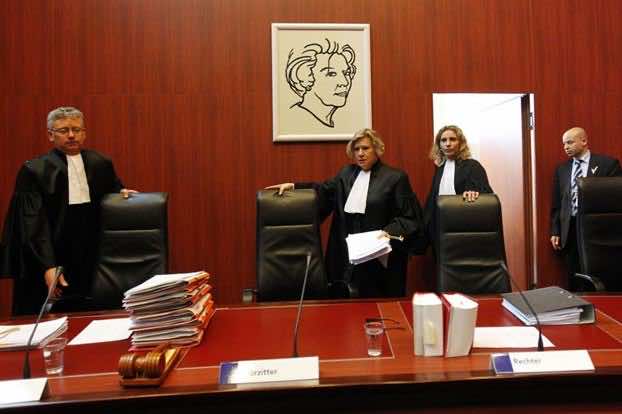 Six teenagers and one of their fathers appeared before a Dutch court on Monday to face charges over the killing of a football linesman last year, in a case that shocked the football-mad country.

At a pre-trial hearing, with limited access for the media at the Lelystad courthouse, northeast of Amsterdam, the teenagers and a 51-year-old man whose 16-year-old son was with him in the dock, were all charged with the death of Richard Nieuwenhuizen on December 3.

Nieuwenhuizen, 41, died a day after allegedly being kicked several times in the head during an attack by enraged young opposition footballers shortly after the final whistle of an amateur game.

Monday’s hearing to prepare for trial at the end of May, saw defence lawyers asking for their clients to be released from custody and judges agreeing to allow a defence expert witness on the cause of Nieuwenhuizen’s death.

Seven youths and a man, identified only as El-Hasan D., were subsequently arrested in connection with the December 2 assault.

The youths and El-Hasan are all charged with homicide, public violence and brutality. Six youths, aged between 16 and 17, as well as El-Hasan remained in custody while a seventh teenager, aged 15, is free but faces similar charges.

All eight are connected to, or are members of, the Nieuw Sloten football club, which played against Nieuwenhuizen’s Buitenboys Club in Almere, just west of Amsterdam, when the attack occurred.

Nieuwenhuizen officiated as a linesman in the under-17 match in which his own son also played and was set upon shortly after the final whistle by members of the Nieuw Sloten club. He was allegedly kicked several times in the head but got up and went home.

He became ill a few hours later and died the following day in hospital with his family at his side.

The linesman’s death horrified the Netherlands where 1.2 million people out of a population of 16.5 million are members of the national football federation KNVB.

It prompted deep soul-searching in a country with an often fanatical football culture.

“The incident caused huge social upheaval because it happened on a football field where sports are normally played and lots of children are present,” Jetty Bult of the public prosecutor’s office told AFP.

“People do come to harm in fights, but this specifically happened on the football field,” she said.

A few days after the attack, thousands of people turned out for a silent march in Almere to pay final tributes to Nieuwenhuizen, with the KNVB calling off all amateur matches that weekend.

Around the country signs were put up including at the Buitenboys Club which read in Dutch: “Zonder respect geen voetbal” – “Without respect, no football”.

Teams at the Club World Cup in Japan held a moment of silence in Nieuwenhuizen’s memory before the tournament kicked off.

The accused are to go on trial at the end of May, but it is not yet known whether the trial will be open to the public as the accused are minors.

Should the teens be found guilty, they could face between one and two years behind bars in a special facility for children.

The maximum punishment for homicide for adults is 15 years in jail.

Monday’s hearing was held behind closed doors with a selected number of journalists allowed to follow via CCTV link in an adjoining court room.

“This is a hearing to prepare for trial. A number of things still need to be investigated,” Lelystad court spokesman Onno Mulder said.

One of the accused’s lawyers, Sidney Smeets told AFP outside the courthouse his client “finds it incredible that he has to appear before the court as a suspect in the linesman’s death”.

“Nobody would have foreseen that this incident would get out of hand as it did,” he said.

In a surprise twist last week, Dutch media reported that three members of the Nieuw Sloten team were not even supposed to have been playing on the day Nieuwenhuizen was attacked.

Two of the boys did not have “players’ passes”, while a third was not a Nieuw Sloten member, Dutch media reported, citing court documents.