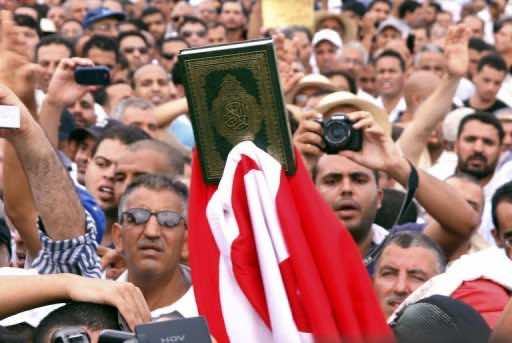 Epistemology has to do with ‘knowledge’ and ‘understanding.’ In fact, understanding the failure of Islamist governments in the Arab world cannot be achieved without an analysis of their understanding of reality, themselves, and the sacred texts upon which they build their different ideologies.

The epistemological problem that emerged with the arrival of Islamists in power in the Arab world is the following: the ideal justice (the ideal state) that they preached for a long time remains unachievable. On the contrary, what we noticed is that the fight to create a just society resulted, ironically, in another form of governing which is considerably oppressing (arts & media oppressions as examples). Adel Imam’s case is a concrete example that shows the narrow perspectives of some Islamists, who have exploited the arrival of Muslim brothers to power to take revenge of some artists.

Similarly, on August 15, 2012, The New York Times published an article entitled “Egypt’s Islamist Leaders Accused of Stifling Media,” in which it argues that arrests and censorship on media and journalists continues after the revolution.

Can we say then, that the apparent ideal goal of a just society hides a savage willingness to achieve power?

A basic reading would suggest that the Egyptian and Tunisian revolutions are failing because of the external factors. While this fact might be true, I cannot stop thinking that the internal factors play a decisive role. These factors have to do with four major points:

1. Islamists in relation to reality

2. Islamsits in relation to themselves

Islamists have to know their power and limits. They, in fact, have to provide a coherent discourse: a discourse which should not be nostalgic nor idealist.

3. Islamits in relation to the sacred texts (Qu’ran and Hadith)

The sacred texts and their interpretations, which serve as a ground upon which these islamist movements build their ideological discourses, have to be approached with certain realism and logic. Rereading those texts becomes today an urgent task, if we are to present an acceptable and livable Islam. Islam, which does not betray its own core and solid principles, I mean peace and liberty.

4. Islamists and dilemma of tradition, modernity and secularism.

Islam has always been a source of openness and flexibility. It is until a very recent time, especially with the development of political Islam that we have ignored consciously or unconsciously this fundamental aspect of Islam ‘flexibility.’

A Historical analysis of Islam shows clearly, that the early ages of Islam have been marked by amazing concepts like co-existence and openness.  The development of jurisprudence schools, philosophy and sciences may constitute a solid proof of this reality.

It seems to me that, the urgent task, if we don’t want to regenerate deformed forms of Islam, is to work together to restore the ability of Islam to adapt to any new historical, social or political contexts. Recent events in the Arab world have shown the limits of political Islam. Therefore, the other urgent task is to rethink of Islam in terms of modernity and secularism. However, our approach should not be a conflicting approach; it has, on the contrary, to be a more negotiating strategy.  This means that we have to focus on the common points in order to minimize the gap and present a more livable Islam.