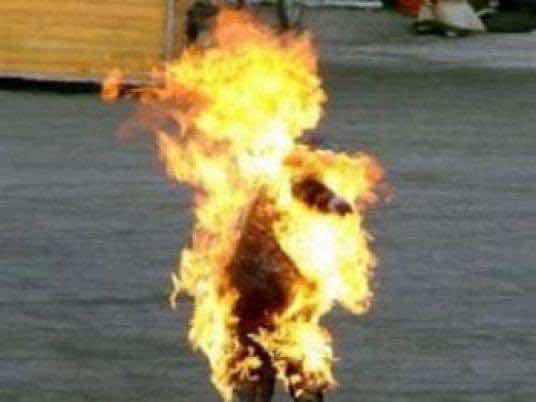 A vendor Tuesday was in a “critical” state after torching himself in Tunis, hours before lawmakers were to vote on a new government to pull the country out of a deep political crisis and steer it to elections.

“This is a young man who sells cigarettes because of unemployment,” shouted the man, according to a witness, before immolating himself in front of the municipal building on Habib Bourguiba avenue, the Mecca of the 2011 uprising that toppled ex-dictator Zine El Abidine Ben Ali.

“Allahu Akbar! (God is greatest!)” said the man as he set himself ablaze.

Passers-by rushed to douse the flames but not before the man, believed to be in his 20s, had suffered serious burn wounds. He was still conscious when he was rushed to hospital by emergency services.

A hospital source said he was “in a critical condition and only his feet were not burned.”The number of people committing suicide or attempting to take their own lives has multiplied in Tunisia since a young street vendor set himself on fire on Dec.17, 2010, in a drastic act of protest against police harassment.

Mohamed Bouazizi’s death in the town of Sidi Bouzid ignited a mass uprising that toppled Ben Ali the following month and touched off the Arab Spring uprisings across several countries in the Middle East and North Africa.

Economic and social difficulties were the key factors that brought down Ben Ali’s regime and two years since he fled from Tunisia unemployment and poverty continue to plague the north African country.

The economy was badly affected by the revolution, which paralysed the strategic tourism sector, although the country is out of recession and posted 3.6% growth in 2012.

Unemployment remains high at about 17%, especially among young graduates.

Tunisia has also been struggling to emerge from a political crisis exacerbated by the daylight murder on Feb.6 of Chokri Belaid, a leftist opposition leader.

More than two years after the mass protests that toppled Ben Ali, Tunisia is still without a fixed political system due to a lack of consensus between the main parties.

The ruling Islamist Ennahda party is pushing for a pure parliamentary system while others are demanding that the president retain key powers.

Lawmakers were to vote later Tuesday on Islamist premier-designate Ali Larayedh’s new cabinet line-up, formed as part of efforts to resolve the political impasse, which last month brought down the government of Hamadi Jabali.

The MPs are also to vote on a timetable for the adoption of a new constitution and the staging of legislative elections.

The tight political calendar stipulates that the drafting of the constitution should be completed by Apr.27 with a final vote set for Jul.8, as each article must be first debated and then approved by an absolute majority of MPs.

A date of Oct.27 has been proposed for Tunisia’s next legislative and presidential polls, but some MPs have said this is unrealistic.

Several political timetables drawn up since the Ennahda’s sweeping election victory in the first post-revolution poll have not been respected.

Assembly speaker Ben Jaafar has called for an end to the tug-of-war, with the political uncertainty in Tunisia also exacerbated by the growing influence of militant Islamist groups.