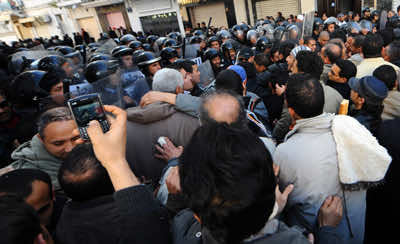 The Tunisian authorities have detained two people for insulting security forces in a rap video that they uploaded to the Internet, the interior ministry said on Tuesday.

“The rap video posted on YouTube called ‘The Police are Dogs’ has words and gestures that are unethical, abusive and threatening towards security forces and magistrates,” the ministry said.

“A police investigation identified those who made and released the video… there are eight of them. On Sunday, March 10, two of them, a young man and a girl, were arrested.”

The Ben Arous court in Tunis authorised their detention, the ministry said.

Media outlets reported that the two were a cameraman and an actress seen in the clip, adding that Tunisian rapper El Weld was being sought.

In the video (http://www.youtube.com/watch?v=6owW_Jv5ng4) the singer is heard saying: “Police, magistrates, I’m here to tell you one thing, you dogs; I’ll kill police instead of sheep; Give me a gun I’ll shoot them.”  Interior ministry spokesman Riahi Adel said the two were arrested for slander and rebelling against officials, and that they could face up to five years in prison.

Tunisian artists regularly denounce police and accuse the Islamist government led by the Ennahda party of curbing freedom of expression.