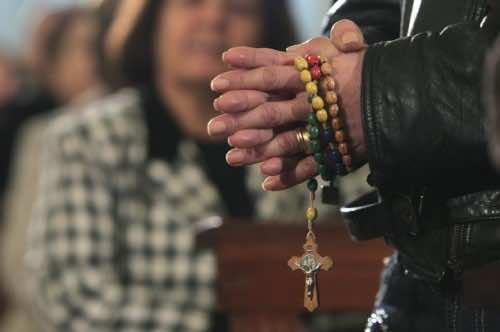 Fifty-five Egyptian Christians arrested last month in Libya for allegedly seeking to convert Muslims have been freed, while four others are still behind bars, the Egyptian foreign ministry said on Tuesday.

“Our embassy has been assured of the release of 55 people and is actively working to seek the release of four others who are still in detention,” deputy spokesman Nazih al-Naggary told AFP.

His comments come a day after a human rights lawyer said that one of those jailed had been tortured to death in custody, prompting demonstrators to attack the Libyan embassy in Cairo.

Ezzat Hakim Attallah “died after being tortured with other detainees” in the eastern Libyan city of Benghazi, said Naguib Guebrayel, a Coptic Christian lawyer who heads the Egyptian Union for Human Rights watchdog.

On March 1, a Libyan security official said some 50 Egyptian Copts were arrested on illegal immigration charges, although they were suspected of proselytising in Libya’s second city, Benghazi.

He said they were found in possession of a quantity of Bibles, texts encouraging conversion to Christianity and images of Christ and the late Pope Shenuda of Egypt’s Coptic Christians, none of which were for “personal use.”

Four foreigners — an Egyptian, a South African, a South Korean and a Swede with a US passport — were also arrested in Benghazi in mid-February on suspicion of trying to convert Muslims to Christianity, something Islam strictly prohibits.

The reported death of Attallah sparked angry protest Monday outside the Libyan embassy in Cairo, as dozens of demonstrators threw stones at the building, tore down Libyan flags and broke the name-plaque of the mission.

And they chanted slogans hostile to the Egyptian government, accusing authorities of having done nothing to assist the Copts jailed in Libya.

Since the 2011 revolution that ousted dictator Moamer Kadhafi, Libya’s small Christian minority has expressed fears over Islamic extremism in the North African nation.

Coptic Christians comprise up to 10 percent of Egypt’s 83 million people and constitute the largest Christian minority in the Middle East.

Libya had as many as 100,000 Christians before the 2011 revolution but a only a few thousand remain, according to church officials.