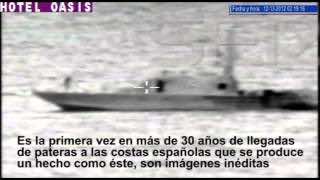 On December 13, 2012, a makeshift boat with 25 young Moroccans on board, was on a beach northwest of Lanzarote when it crossed with Cabaleiro River patrol.

When the makeshift boat tries to flee in the opposite direction, the Civil Guard began the persecution. A guard watches everything from the bow.

Finally the boat stops running. At that moment, instead of stopping and begin the rescue, the patrol of the Spanish Civil Guard, with a size five times larger, assails it.

After the collision, a group of survivors tried to stay afloat while the makeshift boat was sinking.

The agents threw lifeline but they only succeeded to board 17 of the 25 people. One of them had died.

The other six went missing at sea. The pictures, published by Cadena Ser, reopened the controversy over the first accident of its kind in 30 years.

According to the version of the Spanish Civil Guard, the boat broke down about an hour before spotting the makeshift boat and was the engine malfunction which prevented them from maneuvering to avoid the collision.

However, survivors insist that the collision could have been avoided.