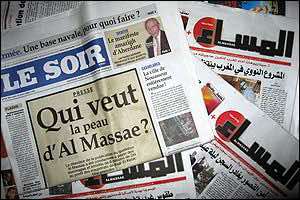 Four main topics dominated the editorials of Moroccan dailies this Wednesday, namely the launch of the national dialogue on civil society, the classification of Morocco in the WEF report, Morocco’s relations with African countries, and the triple homicide on Sunday in a police station in the city of Mecharaa Belksiri.

Under the title “NGO, you are welcome at Choubani’s” “Aujourd’hui le Maroc” reports that the Ministry of Relations with the Parliament and civil society has launched a national dialogue on civil society. According to the paper, “while the government keeps talking about good governance and austerity measures, the same ministry reveals plans to organize national and international conferences, regional meetings and hearings, with buffets that are definitely paid by taxpayer’s money.”

“L’Economiste” which ponders on the Latest WEF report which puts Morocco in 71th position out of 140 in the field of tourism, paints quite a gloomy picture on the state of tourism in the country and how Morocco is doing it totally wrong, and send a wakeup call to everyone concerned to ask tough questions on how competitive Morocco is in the sector and how it is faring in this ever-changing and challenging world.

With regard to African-Moroccan relations, “Attajdid” argues that after the economic crisis that hit the northern shore and the wave of democracy that has affected many parts of the Arab world, it is necessary for Morocco to seek to promote its presence to protect its interests and explore new markets in Africa to support the development dynamic of the national economy.

“Bayan Al Yaoum” sheds more light on the murder case at a police district in the city of Machraa Belksiri where a police officer shot three of his colleagues. This murder case requires the intervention of the concerned authorities to determine what really happened, says the paper, noting that law enforcement is not a “an ordinary job”, since it is related to the safety of citizens and the protection of property, and stability.