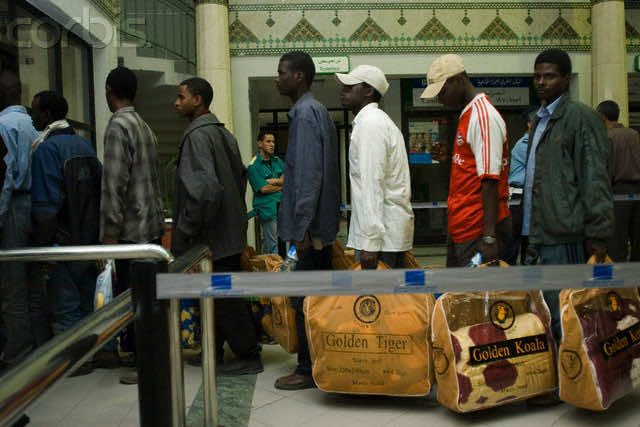 The medical charity Doctors Without Borders (MSF) on Wednesday raised the alarm over increased violence against illegal migrants in Morocco, pointing a finger of blame at both Rabat and Madrid.  “Violence is a daily reality for most sub-Saharan migrants in Morocco,” MSF said in a 40-page report.

“A serious increase in abuse” was recorded in 2012, it said, urging the Moroccan and Spanish authorities to “take drastic measures immediately” to halt “institutional violence”.

The European Union has over the past decade “toughened border controls” and delegated responsibility for combating illegal immigration to countries bordering the bloc, the MSF said.

It said Morocco had turned from “a transit country” into “a country of destination by default.”

According to local associations, Morocco was hosting between 20,000 and 25,000 migrants from sub-Saharan countries in 2012 hoping for access to Europe through Spain.

But “experience has shown that the longer sub-Saharan migrants stay in Morocco, the more their vulnerability increases,” said MSF.

The report came as the medical charity, which has worked in Morocco since 1997, prepares to pull out of the country in line with a decision taken more than a year ago, said its coordinator David Cantero.

“This could seem contradictory but we’ve found that the work required of us here is not that of a medical charity,” he told AFP. “We’re not a human rights organisation even if we speak out against violations.”

Cantero said access to medical care had improved in Morocco and that MSF had worked to hand over responsibilities to local groups.

MSF said it had provided medical care to more than 1,100 people last year in eastern Morocco where most migrants have gathered.

Its report featured photographs of patients with jaw, skull and leg fractures, and condemned acts of sexual violence linked to human trafficking and “deep psychological scars”.

It said 80 percent of migrants had been expelled on several occasions and condemned what it called “the ping pong” between security forces in Morocco and neighbouring Algeria as the illegal immigrants were shuttled back and forth.

In 2012, efforts resumed to infiltrate Melilla, a Spanish enclave fenced off from Morocco, with unreported cases of “extreme violence” to keep them out, it said. On Tuesday, up to 25 people were injured in the latest such case.

Along with Ceuta, another Spanish enclave in northern Morocco, Melilla is one of Africa’s two land borders with the European Union, a haven for many Africans fleeing poverty.