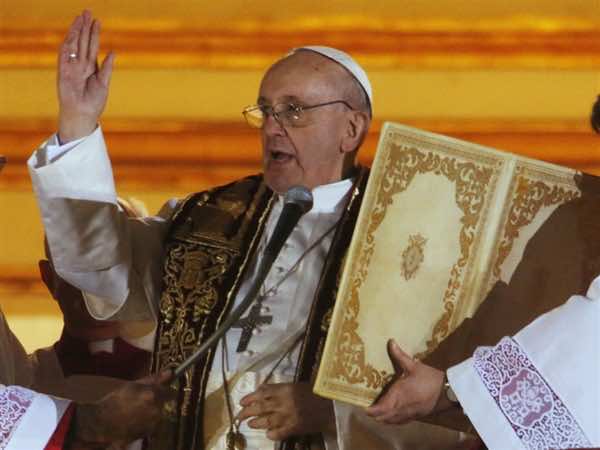 Pope Francis arrived at a Rome basilica on Thursday for a private prayer on his first full day as the leader of the Roman Catholic Chuch, following his historic election.

The 76-year-old Argentine pope entered Santa Maria Maggiore by a side entrance, an AFP photographer reported.

The 76-year-old railway worker’s son emerged smiling onto the balcony of St Peter’s Basilica to cries of “Long live the pope!” and devoted his first prayer to his predecessor Benedict XVI as tens of thousands of pilgrims cheered.

The first non-European pope in nearly 1,300 years called for “fraternity” among the world’s 1.2 billion Catholics after Benedict’s scandal-ridden papacy.

“It seems that my brother cardinals have gone to the ends of the earth (to find a pope),” Francis said, referring to his native Argentina, which erupted in celebrations at his appointment.

“Now, we take up this journey… A journey of fraternity, of love, of trust among us,” he said.

The former Jesuit priest from Buenos Aires had barely figured in the pre-vote speculation, although he is believed to have finished runner-up to Benedict in 2005.

World leaders hailed the election of a pope seen as a moderate conservative who chose to name himself after the ascetic St Francis of Assisi.

US President Barack Obama said Bergoglio was “a champion of the poor and the most vulnerable among us.”

Justin Welby, the new leader of the world’s Anglicans, said he was looking forward to “working together” with the new pope.

Vatican spokesman Federico Lombardi said the choice by 115 cardinals in a secret conclave in the Sistine Chapel had “widened the perspective of the Church”.

Sergio Rubin, religious writer for the Buenos Aires-based newspaper Clarin, said that, like pope John Paul II, Bergoglio was “conservative at the level of doctrine, and progressive on social issues”.

The election was seen as recognition of the Church’s rapid growth in Latin America, which is now home to 40 percent of the world’s Catholics, in contrast to its decline in Europe.

In a rain-soaked St Peter’s Square, Argentinians who had gathered to see the white smoke were stunned.

Julio Cesar Attaremo, 42, who was waving an Argentinian flag, said: “He’s very humble and he’s someone who really goes out to the people.

“We’re very happy and proud. Not just for Argentina but for the whole of South America.”

In the Argentinian capital, the faithful attending mass at the main cathedral gave Francis a standing ovation as the news came through.

There had been growing calls both within and outside the Church for the next pope to come from the southern hemisphere for the first time, but Bergoglio ranked just 40th on one bookmakers’ list of pre-conclave favourites.

The Vatican said his inauguration mass would take place on Tuesday — a significant date in the Catholic calendar because it is the Feast of St Joseph, patron saint of the universal Church.

The Argentinian of Italian descent — the 266th pope — told the faithful he would visit a shrine to the Virgin Mary in his first act as pope on Thursday, less than a day after his election. The Vatican said he could head to the basilica of Santa Maria Maggiore in Rome.

White smoke earlier billowed from the chimney on the Sistine Chapel and the bells of St Peter’s Basilica rang out, signalling a successful election had taken place after five rounds of voting — one more than when Benedict was elected in 2005.

Vatican expert Bruno Bartoloni said Bergoglio was “a solid, pragmatic man who can do something concrete, notably to reform the Roman Curia” — the internal workings of the Vatican.

“On the social level he is probably very open, while probably conservative on moral issues,” he said, describing a duality typical of the cardinals named by Benedict and his much-loved predecessor John Paul II.

Benedict’s reign was riven by scandals and the new pope will face immediate challenges — chiefly stamping his authority on the Vatican machinery and trying to coax back a Catholic flock that is deserting churches across the West.

The scandal of hushed-up sexual abuse of children by paedophile priests going back decades has also cast its shadow over the conclave.

The group noted that the Jesuit order from which he hails has a “troubled” track record on paedophilia, and said: “St Francis was the greatest reformer in the history of the Church, Pope Francis must do the same.”

Benedict broke with tradition when he became the first pope to step down since the Middle Ages, saying he lacked the strength to continue. The 85-year-old German theologian has said he will retire to a former nunnery inside the Vatican.

Francis has already called his predecessor and they will meet soon, the Vatican said.

In one of his last acts as pope, Benedict issued a decree allowing cardinals to bring forward the date of a conclave in the event of a pope’s resignation — a move seen by many as potentially setting a precedent for ageing pontiffs in the future.

Vatican experts said the prospect of future resignations could have encouraged the cardinals to elect an older candidate in the knowledge that he could step down if his health fails.