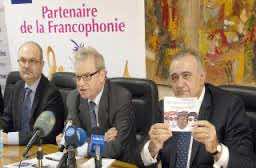 A rich and diversified program was scheduled to celebrate the International Day of Francophonie in Morocco, which will be unveiled at a press conference on Wednesday at the Information and Communication Institute (ISIC) in Rabat, in partnership with the Ministry of Foreign Affairs.

During this press conference, the organizing committee including diplomatic representations of francophone countries and bodies in Morocco will present the different activities programmed to celebrate the event on March 20, a statement of ISIC said.

Half a billion French-speaking people around the world will celebrate this event which began in 1998 as a way for the then 49 members of the Organisation internationale de la Francophonie (OIF) to celebrate their common bond, the French language, as well as their diversity.