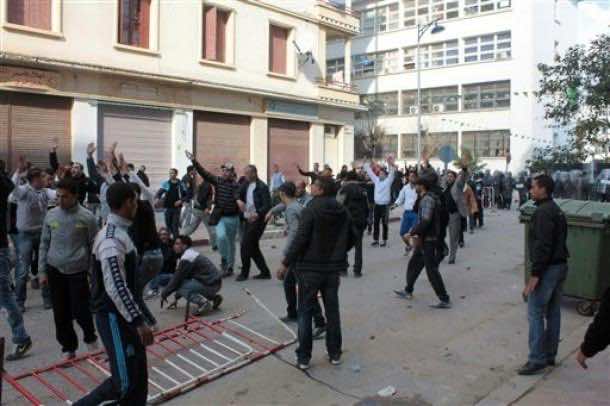 Thousands of unemployed Algerians protested on Thursday in the southern town of Ouargla, near the country’s most important oilfield, to demand jobs and an end to lawsuits against them, sources said.

“We are demanding the right to work and an end to the lawsuits against the jobless,” Abdelmalek Aibek, a representative of the town’s unemployed residents, told AFP by phone.

“There are thousands of us gathered in the square outside the town hall,” he said, adding that the protesters, “people out of work, but also trade unionists and human rights activists… have come from different locations.”

Tarek Mameri, a well-known blogger and unemployed activist, described the protest as “the first success in our struggle for dignity,” adding that some 3,000 people had taken part, a number confirmed by other sources in Ouargla.

A security source said that “one thousand” people had attended the peaceful gathering, adding that it passed off without incident.

Algeria is plagued by a high rate of youth unemployment affecting 21.5 percent of those under 35, according to estimates from state agencies and the International Monetary Fund. Nationwide unemployment stands at 10 percent.

The situation is worse in the south, an underdeveloped but hydrocarbons-rich region flooded by jobseekers from the north.  Fifteen unemployed men who held a previous protest in Ouargla, which lies around 65 kilometres (40 miles) from the giant Hassi Messaoud oilfield, are due to go on trial on March 26 for taking part in an “unarmed gathering.”

Separately, four men were jailed for one month on Tuesday by a court in Laghouat, on charges of “illegal gathering,” after they staged a protest outside the national employment agency in the central Algerian town.

On Monday Prime Minister Abdelmalek Sellal urged companies operating in the south to ensure that local jobseekers be the priority recipients of employment in the region.