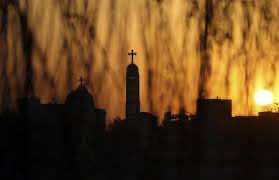 Gunmen on Thursday attacked an Egyptian Coptic church in the eastern Libyan city of Benghazi and started a fire, witnesses said.

“Several armed men arrived firing in the air, started a fire in the church and left,” a resident near the church in central Benghazi told AFP, asking not to be named.

An AFP correspondent who visited the scene said the windows of the church — already attacked in late February when its priest and his assistant were assaulted — had been blackened but the walls did not show signs of a fire.

Since the 2011 revolution that ousted Moamer Kadhafi, Libya’s small Christian minority has expressed fears over Islamic extremism, especially with the rise of armed militias enforcing their own law in the absence of central control.