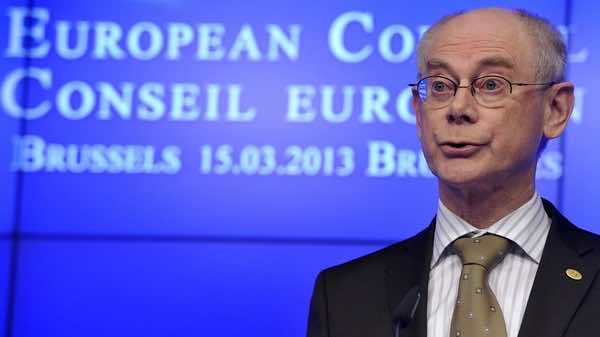 On the second anniversary of the uprising that evolved into Syria’s brutal civil war, leaders at a European Union summit failed to agree Friday on whether to arm rebels trying to overthrow President Bashar al-Assad’s regime.

The item was not on the agenda – the main topic was EU-Russian relations – but French officials had indicated President Francois Hollande would raise it at the meeting, which took place in Brussels. Britain, too, has pressed for the ability to arm the rebels, but other countries are adamantly opposed to putting more munitions into Syria.

Members of the meeting decided to hand over the issue to their foreign ministers, asking them to try to forge a common position when they hold an informal meeting in Dublin at the end of next week.

EU president Herman Van Rompuy said the 27 heads of state and government “discussed the dramatic situation in Syria and reaffirmed the EU’s full engagement in international efforts to end the intolerable violence.”

“We are all deeply concerned about the desperate situation in Syria,” Dutch Prime Minister Mark Rutte said following the summit. “Europe can only play a strong and effective role if it acts as one.”

The EU has in place an embargo prohibiting any arms from being sent to Syria, whether to the rebels or to the Assad regime. That embargo is scheduled to remain in effect until May, when it will either be renewed or allowed to expire.

France and Britain have argued they should be able supply arms to the rebels, saying the Assad regime is receiving arms from Russia and Iran. With more weaponry, those countries argue, the rebels could defend themselves and the civilian population, and members of the Assad regime would see more clearly the need to negotiate a political settlement.

But some other EU countries say Syria is already awash in weaponry and doesn’t need any more. They argue that arming the rebels could spark an arms race in the country, with Russia and Iran continuing their support for the regime.

In Vienna, Austrian Defense Minister Gerhard Klug said he was opposed to EU weapons for Syrian rebels, saying they could end up in the wrong hands. Austrian troops form part of the 1,000-strong U.N. peacekeeping force on the Golan, and the country’s concern about the safety of its soldiers has risen since Syrian rebels temporarily detained 21 Filipinos last week.

Klug told Austrian state broadcaster ORF Friday that EU arms deliveries “would mean more weapons in this crisis region,” adding there was no guarantee about whom they would end up with.

The effort to overthrow Assad’s regime began as a popular uprising on March 15, 2011. Since then, fighting has spread across the country, claiming more than 70,000 lives and displacing nearly 4 million of Syria’s 22 million people.

Rebels have seized large swathes of territory, but growing tensions between liberals and moderate Muslims on the one hand, and Islamists on the other, have raised fears of a collapse into a sectarian bloodbath.

The Damascus government suspects neighboring Jordan of opening its borders this month to weapons purchased by Saudi Arabia in Croatia for the rebels, a Syrian security source told AFP.

“We deplore the change of attitude of Jordan, which in the past 10 days has opened its borders and is allowing to cross over jihadists and Croatian weapons bought by Saudi Arabia,” the source said.