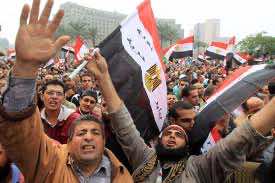 Hundreds of Egyptians demonstrated in Cairo on Friday to press for the army to assume power in a country plagued by unrest and instability two years after a revolution which toppled president Hosni Mubarak.

The protest was held in eastern Cairo in response to a call by retired army officers and groups opposed to the Muslim Brotherhood, the party of President Mohamed Mursi.

“The army must return” to power and “Down with the power of the guide,” they chanted, referring to the Brotherhood’s spiritual guide Mohamed Badie, as they waved portraits of General Abdel Fattah al-Sissi, the armed forces chief.

In late January, Sissi warned that Egypt’s political crisis could lead to the collapse of the state, something which the military which ruled the country between the fall of Mubarak and last June’s election of Morsi would not allow.

Opposition groups and disgruntled Egyptians accuse Morsi, the Muslim Brotherhood and other Islamists of monopolising power, and say the revolution failed to reach its goals of social justice.